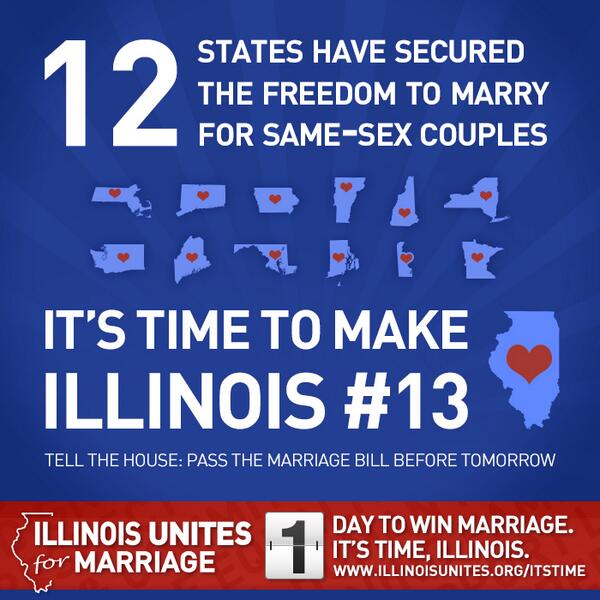 It seems there lies a possibility for Illinois to see marriage equality passed perhaps before summer’s end.

House Speaker Michael Madigan (D-Chicago) acted quietly on Friday night before the House adjourned to extend the bill’s deadline for approval until August 31.

State Rep. Greg Harris (D-Chicago) told a packed House chamber on Friday evening that he had to put off a vote on the proposal until November.

However, were Governor Pat Quinn to call lawmakers back to Springfield in the summer for a special session to address pension reform, which also was left without resolution, he could include Senate Bill 10 in a special session proclamation.

If Quinn declines to include marriage equality in any order to lawmakers to return to Springfield, Madigan could call a House special session of his own at the same time to take up the legislation, an insider noted.

“It’s a fascinating move,” said one, long-time lobbyist. “It suggests that there is plan to get it done.”

However – nothing is certain, and a new wrinkle develops with this scenario. The Observer points out that:

“Nevertheless, during a summer session, House lawmakers would need to amend the bill and change the effective date from ’30 days’ from a gubernatorial signature to January 1 in order to avoid a 3/5th or 71 vote requirement, an insurmountable hurdle. Amending the bill’s effective date would also require an Illinois Senate vote to concur with such a change.”

That being said, the state Senate would have to come back to approve the changes.