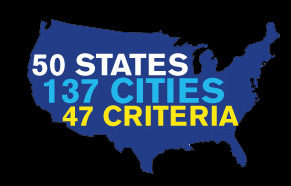 The Human Rights Campaign has released a new Municipal Equality Index designed to rate cities much like the HRC’s Corporate Equality Index.

The index rates 137 cities, including the country’s 50 largest cities, the 50 state capitals, and 75 municipalities with a high proportion of same-sex couples.

From ThinkProgress: The index measured cities according to non-discrimination policies and partnership recognition, as well as LGBT inclusion in civil services and law enforcement. Eleven of the cities scored a 100 percent rating, while 25 percent had at least 80 points. Here are the cities with the perfect scores:

ThinkProgress points out that the index doesn’t necessarily rate a city’s “welcoming climate” but helps to point out where cities are making an effort to be inclusive of LGBT folks. And, it goes without saying, inclusiveness and equality makes for better business for attracting business talent and economic growth.

Check out the index at Human Rights Campaign.