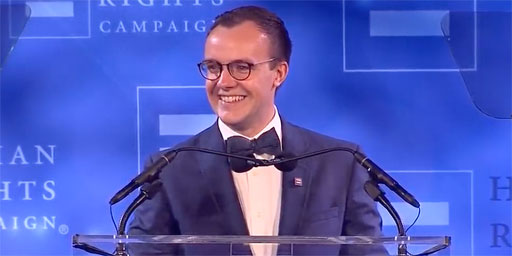 “So, I’ve had a busy couple months,” began Buttigieg. “Never underestimate what can happen when you agree to go on a date with a cute guy from South Bend, Indiana.”

“I now live in a world where people take photos of me in the deodorant aisle at the grocery store,” he continued. “But, it is not lost on me that I was able to marry the man I love by the grace of one Supreme Court vote.”

.@Chas10Buttigieg brought down the house in Houston tonight with a powerful call for each of us to fight for an America where every person can live their truth and be their authentic selves. pic.twitter.com/UG2Evf4SRU

Buttigieg also joked about the possible history he could be a part of. “I could be the first man in history to pick out the White House china.”

Buttigieg spoke at one point about the importance of passing the Equality Act, which would add LGBTQ protections to the Constitution under existing civil rights laws, and praised HRC for the work it has done over the years.

“We need someone in the White House who will sign the Equality Act into law,” he added. “And luckily, I know a guy.”

As I’ve reported before, Mayor Pete has quickly gone from what some might have pegged as a “niche candidate” for president to a mainstream contender. And Chasten is part of that whole equation.