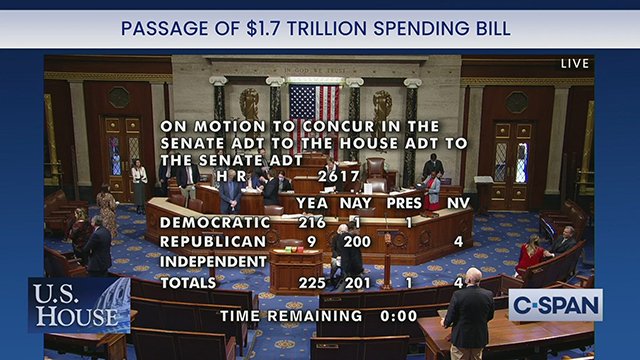 The House approved the $1.7 trillion government funding package that will provide increases to national security and domestic spending, plus billions of dollars to aid Ukraine.

The legislation now heads to President Biden’s desk for his signature.

The Senate approved a spending bill which included more than $44 billion in emergency aid for Ukraine two days after President Volodymyr Zelensky of Ukraine addressed a joint session of Congress. Here is a closer look at what is in the latest legislation. https://t.co/nkZYPz6rBY

The bill was the last major legislative accomplishment of the 117th Congress and set aside $858 billion in funds for the military that Republicans pushed for and more than $772 billion for the education, health and veterans programs Democrats have championed.

The measure, approved just before Christmas Eve, is the second major government funding bill passed during the Biden administration and served as the final opportunity for congressional Democrats to shape the federal budget while they retain control of both chambers.

On nearly party lines, the House approved the more than 4,000-page bill by a vote of 225 to 201, with one lawmaker voting present, a day after it was shepherded through the Senate.

Nine Republicans joined Democrats in passing the bill. What’s rich lots of Republicans slipped their own districts’ pork projects into the bill before turning around and voting ‘no’ on the legislation.

And so, they have it both ways – they bring home the bacon but can tell folks they said ‘no’ to spending. #laughable

BREAKING: House passes a $1.7 trillion spending bill with Ukraine aid that avoids a partial government shutdown. The measure goes to President Biden to be signed into law. https://t.co/jkZiZZsQ6p