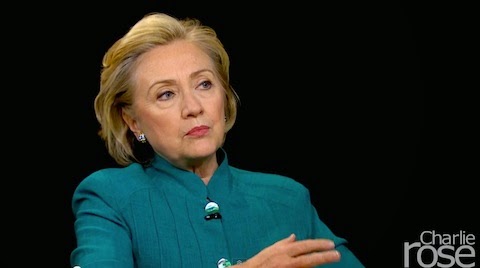 Hillary Clinton, on a current media tour for her new book Hard Choices, shared her thoughts with Charlie Rose on the Malaysia Airline flight that was shot down today.

She noted that the Ukrainian government has been quick to blame the crash on “terrorists,” which is “their name for the Russian insurgents.” Clinton agreed that it “probably had to be” Russian insurgents that brought the plane down, but would need forensic evidence to determine that for sure.

“If there is evidence pointing in that direction, the equipment had to come from Russia,” Clinton continued. “There is a great deal of concern that, not only was a civilian plane shot down, but what this means about the continuing conflict in Eastern Ukraine and the role that Russia is playing.”