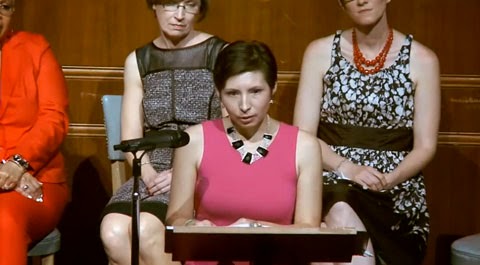 Debi Jackson, mother of a transgender daughter, explains her coming growing awareness of her daughter’s transitioning and debunks myths about transgender children she learned along the way.

“We — or at least I, because they always blame the mom — really wanted a girl so we turned our child into one?” Jackson asks. “Think again. I desperately wanted boys. The idea of raising a girl in today’s world scares me to death.”

“‘Kids have no idea what they want; my kid wants to be a dog, should I let him?'” asks Jackson, reciting another antitrans red herring. “That’s up to you, but I wouldn’t! …There’s a profound difference between wanting to be something in imaginary play and declaring who you are insistently, consistently, and persistently.”

Jackson became emotional as she recounted the religious-based opposition to her daughter, recalling people who told her, “God hates transgender people. They are sinners, and going to hell.”

“My God taught us to love one another,” Jackson explains. “Jesus sought out those who others rejected. Some people choose to embrace Biblical verses that appear to say that transgender people are being wrong,” Jackson adds.

Instead, Jackson says she prefers to focus on biblical verses like 1 Samuel 16:7, which says, “Do not consider his appearance or his height, for I have rejected him. The Lord does not look at the things people look at. People look at the outward appearance, but the Lord looks at the heart.”

In closing her six-minute speech, Jackson offers a heartwarming affirmation of her daughter. “My daughter is a girl in her heart,” says Jackson. “She knows it, God knows it, and that’s good enough for me.”

I know that the idea of transgender is new and uncomfortable for many folks. But, it is real. And these are people’s lives. Hit the video below and listen to the calm, clear voice of a conservative, Southern Baptist mother who learned a lot by paying attention to her child.