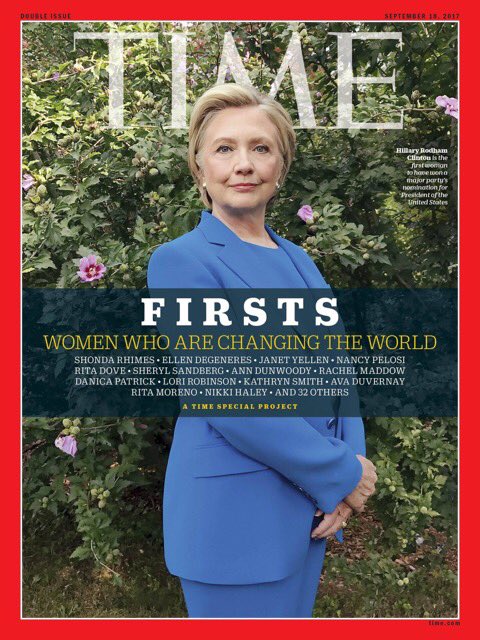 The latest issue of TIME Magazine features a cover story titled “Firsts – Women Who Are Changing The World.”

And, appropriately, the first woman to be nominated for president by a major political party, Hillary Clinton, is on the cover.

I don’t want anyone to be discouraged by my defeat or say that they shouldn’t try or support others who will try. We can’t give up trying. This past election was unprecedented in so many ways. In my upcoming book I try to sort out what I could have done differently, what my campaign could have done differently. But you also have to recognize that you had the unprecedented intervention by an FBI director. You had a foreign adversary successfully influence the election. You had voter suppression aimed primarily at African Americans and young voters. And you had sexism, which was front and center. We have to prevent those things from ever happening again. And some of those are long-term challenges.

I also want my presidential campaign to have helped pave the way for young women who come behind me. Because even though we didn’t win, we made the sight of a woman nominee more familiar, and we brought the possibility of a woman President closer. We brought into the mainstream the thought of a woman leader for our country—and that’s a big deal. Everyone who played a role in making that happen should be deeply proud. We ran into some big speed bumps right at the end, and I believe I would have won but for those, and that’s what I want people to believe. We have to get back up and get back out there.

Don’t be discouraged. Don’t give up. The fight was worth it.