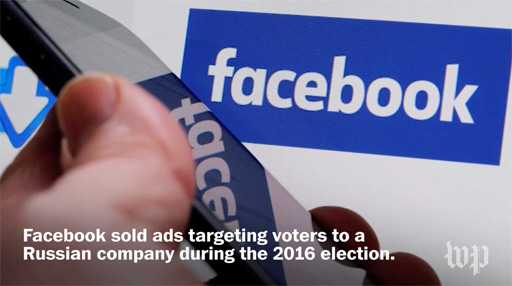 Representatives of Facebook told congressional investigators Wednesday that the social network has discovered that it sold ads during the U.S. presidential campaign to a shadowy Russian company seeking to target voters, according to several people familiar with the company’s findings.

Facebook officials reported that they traced the ad sales, totaling $100,000, to a Russian “troll farm” with a history of pushing pro-Kremlin propaganda, these people said.

A small portion of the ads, which began in the summer of 2015, directly named Republican nominee Donald Trump and Democrat Hillary Clinton, the people said, although they declined to say which candidate the ads favored.

Most of the ads, according to a blog post published late Wednesday by Facebook’s chief security officer, Alex Stamos, “appeared to focus on amplifying divisive social and political messages across the ideological spectrum — touching on topics from LGBT matters to race issues to immigration to gun rights.”

The acknowledgment by Facebook comes as congressional investigators and special counsel Robert S. Mueller III are probing Russian interference in the U.S. election, including allegations that the Kremlin may have coordinated with the Trump campaign.