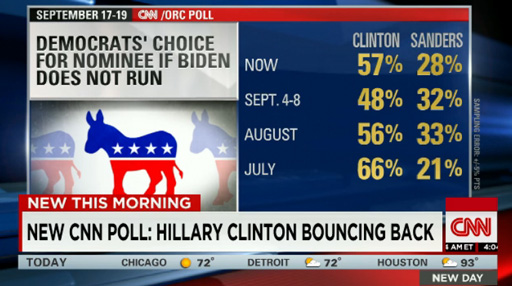 Clinton is backed by 42% of Democratic primary voters nationally, compared to 24% for Vermont Sen. Bernie Sanders, 22% for Biden and 1% for former Maryland Gov. Martin O’Malley.

That’s a marked improvement over an early September CNN/ORC poll that found Clinton leading Sanders, 37% to 27%, with Biden at 20%.

And Biden’s support comes almost entirely from Clinton’s camp. Without the vice president in the race, Clinton’s numbers climb by 15 percentage points, while Sanders’ increase by only 4 points — giving Clinton a nearly 2-to-1 lead at 57% to 28%, with O’Malley moving up to 2%.