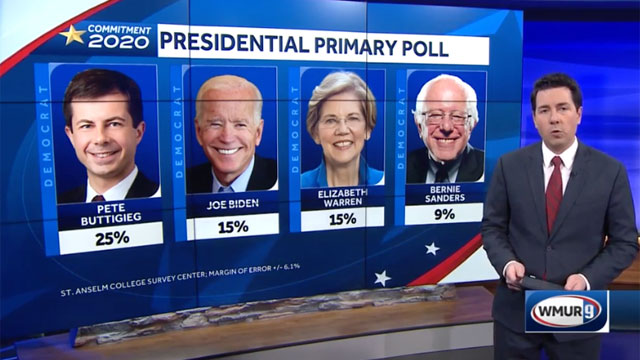 Mayor Pete Buttigieg has surged to the head of the Democratic presidential field in first-in-nation primary state New Hampshire, according to a new poll of likely primary voters released Tuesday.

The Saint Anselm College Survey Center poll of 255 likely Democratic primary voters shows that Buttigieg, supported by 25 percent, now holds a 10 percentage point lead over former Vice President Joe Biden and Massachusetts Sen. Elizabeth Warren, who are tied for second at 15 percent. Buttigieg is substantially ahead of Vermont Sen. Bernie Sanders, who is in fourth place at 9 percent.

Rounding out the top 10 were Minnesota Sen. Amy Klobuchar at 6 percent; billionaire activist Tom Steyer of California at 5 percent; U.S. Rep. Tulsi Gabbard of Hawaii and New Jersey Sen. Cory Booker of New Jersey at 3 percent each; entrepreneur Andrew Yang of New York at 2 percent and California Sen. Kamala Harris at 1 percent. Thirteen percent of those polled said they were undecided.

Respondents were also asked who was the strongest candidate to go head to head against Donald Trump in the general election, and Biden leads in that lane by a mile. 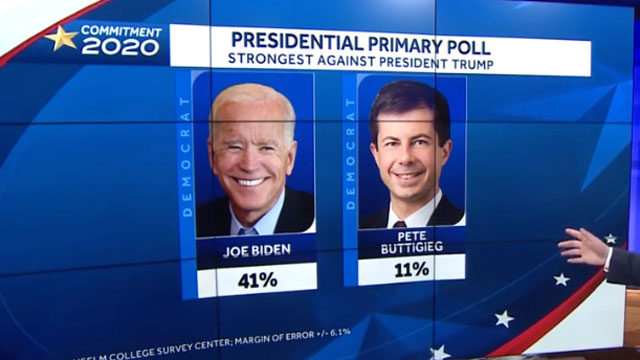 The latest Fox News Poll shows former Vice President Joe Biden still positioned to be the most likely candidate to beat Donald Trump in the 2020 election.

Sen. Bernie Sanders came in second in the survey beating Trump by 8 points (48-40). 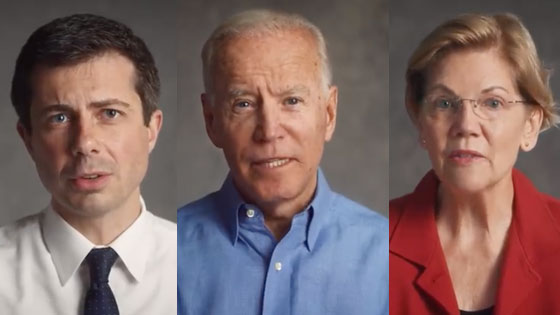 Eight of the top Democratic presidential candidates appear in a new video underscoring the need for gun safety.

The gun control organization named after former Arizona Rep. Gabrielle Giffords, who was shot at point blank range by a maniac, launched the video on Monday.

In the video, the candidates focus on stronger gun laws to prevent school shootings and protect children.

From the Giffords campaign for gun safety:

We deserve a president who listens to the American people, not the NRA.

We deserve a president who takes bold action to make us safer, not one who tweets thoughts and prayers then does nothing.

We deserve a president who fights for stronger gun laws, not gun lobby profits.

2020 Democratic candidates are vying to be that leader.

Our kids deserve to be safe at school. 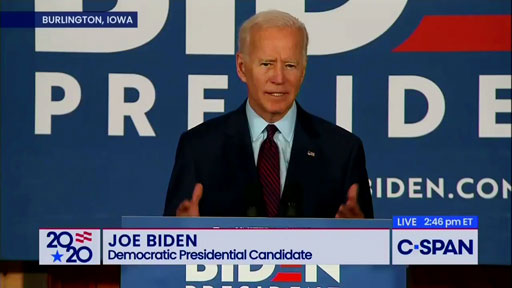 Former Vice President Joe Biden forcefully denounced Donald Trump’s ducking of any responsibility regarding the spate of mass shootings in the U.S.

In a fiery and blunt speech slamming the tenor, tone and words of President Trump as the nation reels from white nationalist domestic terrorism, former vice president Joe Biden reminded all of us of what a presidential president sounds like.

His words were stirring. His delivery was passionate. And they were befitting a man who kicked off his campaign with a video decrying Trump’s shameful response to Charlottesville.

How far is it from Trump’s saying this “is an invasion” to the shooter in El Paso declaring, quote, “this attack is in response to the Hispanic invasion of Texas”? How far apart are those comments?

How far is it from white supremacists and Neo-Nazis in Charlottesville — Trump’s “very fine people” — chanting “You will [not] replace us” – to the shooter at the Tree of Life synagogue in Pittsburgh saying, “we’re committing genocide” — Jews are committing genocide — on his people. I don’t think it’s that far at all.

It’s both clear language and in code, this president has fanned the flames of white supremacy in this nation.

“His vacant-eyed mouthing of the words written for him condemning white supremacists this week I don’t believe fooled anyone.” pic.twitter.com/tt8nBcBzhY

BIDEN: “We have a problem with this rising tide of white supremacy in America. And we have a president who encourages and emboldens it … He says that guns are not the problem in mass shootings. That the issue is mental health. It’s a dodge. Hatred isn’t a mental health issue.” pic.twitter.com/JylC3D2uxE 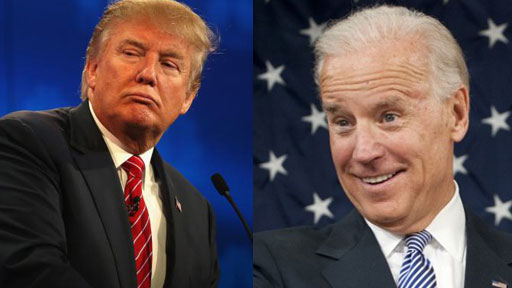 Former Vice President Joe Biden has a 2-to-1 lead nationally over the next closest Democratic presidential contender after the second round of debates, according to the latest Harvard CAPS/Harris Poll.

“Biden has been steady despite some rocky performances at the debates,” said Mark Penn, co-director of the Harvard CAPS/Harris Poll. “The Democratic voters are far more in sync with Biden’s views than any of the other candidates running. He maintains his front-runner status.”

The poll also showed 46 percent of Democrats view Biden as best choice to beat Trump, followed by Sanders at 34 percent. 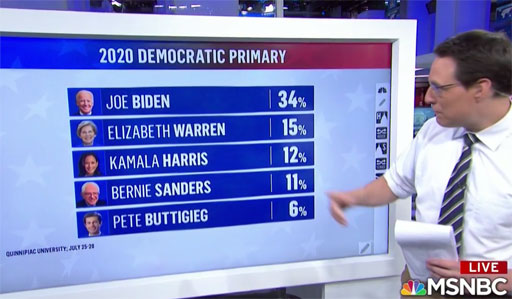 Biden garnered 34 percent support from respondents with Sen. Elizabeth Warren (D-MA) a distant second at 15 percent.
Sen. Kamala Harris (D-CA) comes in third with 12 percent, Sen. Bernie Sanders (I-VT) moved down to 4th position with 11 percent, and Mayor Pete Buttigieg is in single digits with 6 percent.
The polling also showed Biden gets a thumbs-up from 53 percent of black Democrats, with 8 percent for Sanders, 7 percent for Harris and 4 percent for Warren. 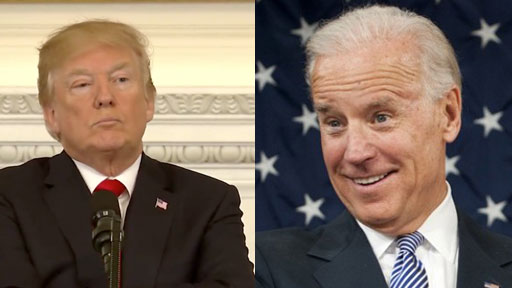 The hosts made the grave error of reading the results of Fox’s own recent poll showing Trump would lose to former Vice President Joe Biden by 10 points.

Remember, this is from Fox News itself.

“FoxNews is at it again. So different from what they used to be during the 2016 Primaries, & before – Proud Warriors! Now new Fox Polls, which have always been terrible to me (they had me losing BIG to Crooked Hillary), have me down to Sleepy Joe. Even considering the fact that I have gone through a three year vicious Witch Hunt, perpetrated by the Lamestream Media in Collusion with Crooked and the Democrat Party, there can be NO WAY, with the greatest Economy in U.S. history, that I can be losing to the Sleepy One. KEEP AMERICA GREAT!”

….the fact that I have gone through a three year vicious Witch Hunt, perpetrated by the Lamestream Media in Collusion with Crooked and the Democrat Party, there can be NO WAY, with the greatest Economy in U.S. history, that I can be losing to the Sleepy One. KEEP AMERICA GREAT!

Here’s the video. Watch how Hegseth jumps in to shut down the idea that Trump’s reelection might be in jeopardy. pic.twitter.com/xANjklgIgc

.@realDonaldTrump, we know you love the polls. We’re glad you saw the latest from Fox: Biden 49%, Trump 39. You’re losing by ten. Have a nice day. 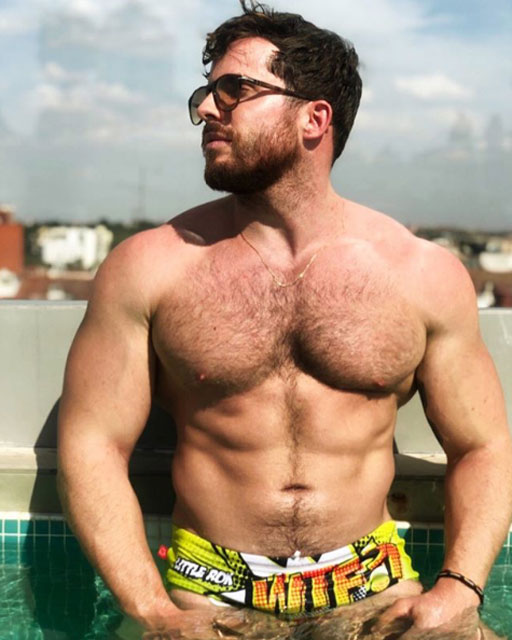 • InstaHunks: Spanish model Fran Dullon (above) celebrated his birthday yesterday! And – be afraid – he’s going to be on the same Atlantis Mediterranean cruise I’m doing in August. So, Ima gonna have to meet him, don’t you know? 🙂

• Gr8terDays: Rutger Hauer, the intense, blond actor who throughout his 50-year career was at his best playing the worst people, died last week following “a very short illness.” He was 75.

• The Independent: Four teenage boys have been charged with an aggravated hate crime over a homophobic attack against two women on a London night bus, the Metropolitan Police has said. Melania Geymonat, 28, and her girlfriend Chris were hospitalised with facial injuries and left covered with blood after the assault on 30 May.

• CNN: House Intelligence Committee Chairman Adam Schiff says Americans should be ‘realistic’ about the fact that the only way Trump will be leaving office is by voting him out. Since Senate Republicans would NEVER find a guilty verdict in an impeachment proceeding, he’s right.

House Intelligence Chairman Adam Schiff: “Should we put the country through an impeachment? I haven’t been convinced yet that we should. Going through that kind of momentous and disruptive experience for the country I think is not something we go into lightly” pic.twitter.com/1wDSUCW7jH

• NPR: For the first time ever, wind has surpassed coal as an energy source in Texas. Data released this month by the Electric Reliability Council of Texas shows wind created 22 percent of the electricity used in the first half of the year, edging out coal by 1%.

• CNN: Former Vice President Joe Biden claps back at Sens. Kamala Harris and Cory Booker ahead of next week’s Democratic debate where they will stand side-by-side onstage.

• Out Music: Tegan & Sara drop the lyric video for their latest single, “I’ll Be Back Someday,” from the duo’s upcoming album Hey, I’m Just Like You, due out September 27.

The new collection is comprised of songs that the twins discovered on old cassette tapes that they wrote at the beginning of their career. The duo listened with fresh ears, rewrote and re-recorded the songs into today. 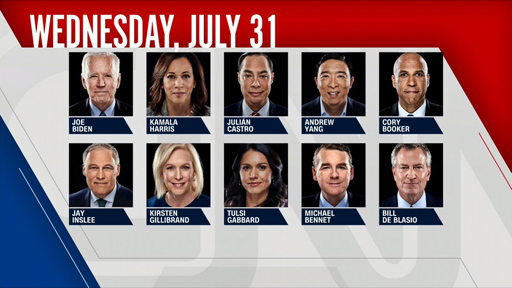 Biden garnered 25% support in the survey taken after the first Democratic debate.
Sens. Bernie Sanders (I-VT) and Elizabeth Warren (D-MA) tied at second with 16% support each.
California Sen. Kamala Harris barely behind them with 14% and Mayor Pete Buttigieg rounds out the Top 5 with 8% support.

These seem to be coalescing into the top tier candidates.

In related news, CNN drew the placements last night for the second Democratic debates set to take place July 30 and 31.

Looks like Sanders and Warren will get to go head-to-head on the first night along with Mayor Pete, Sen. Amy Klobuchar (D-MN) and former Rep. Beto O’Rourke, while Harris and Biden will have another chance to go at it on the second night .

Here are the podium positions for each night of CNN’s Democratic debates https://t.co/BGKn1NXcFz pic.twitter.com/KdjAJHEYjU 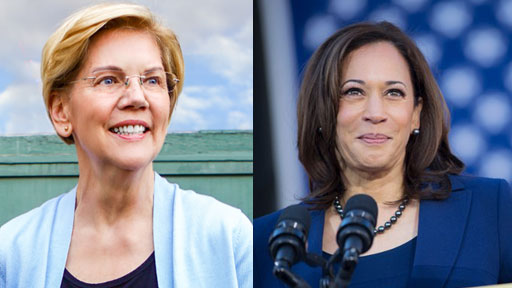 The June 11 Quinnipiac University Poll showed Biden at 30 percent, Sanders at 19 percent, Warren with 15 percent, Buttigieg at 8 percent, and Harris with 7 percent.

And in Iowa, Elizabeth Warren has vaulted to the number one position in the new David Binder Research poll.

Elizabeth Warren leads the pack in the Iowa Caucus, according to a new poll out this morning from David Binder Research, currently earning the support of 20% of likely Democratic caucus-goers.

Kamala Harris and Joe Biden are both within the margin of error with Warren for first place, but they trail just slightly at 18% for Harris and 17% for Biden.

Bernie Sanders has fallen to fourth place in the polling, sitting at 12%, while Pete Buttigieg has 10% in the survey.

Amy Klobuchar and Cory Booker round out the the field with 4% and 2%, respectively, while everyone else is at 1% or below.