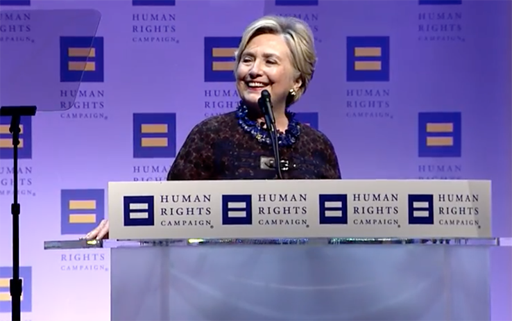 Clinton took aim at the White House’s efforts to roll back the Affordable Care Act and ban transgender service members, as well as its silence on international LGBT issues, during her remarks at the national dinner of the Human Rights Campaign, an LGBT rights organization.

…”You know and [Trump] knows that transgender people have fought and died for this country,” Clinton said, adding that it was “insulting and wrong” for his administration to suggest transgender troops are unfit to serve.

Trump’s Justice Department has also argued in court that LGBT people are not protected from discrimination under the Civil Rights Act of 1964, reversing a legal position trumpeted by the Obama administration. It also voted against a United Nations resolution that condemned use of the death penalty against those who engage in consensual same-sex relationships.

“We cannot rely on this administration or the Supreme Court to uphold LGBT rights,” Clinton said. “We need to be agitating to pass the Equality Act,” she added, referring to proposed legislation that would make housing and workplace discrimination based on sexual orientation and gender identity illegal.

Clinton touched on many other topics, including the upcoming anti-gay Colorado baker lawsuit coming to SCOTUS: “It is just wrong that in 2017 you can lose your job, lose your home, or, if this administration gets its way, be denied a wedding cake simply because of who you are or who you love,” she said.

There’s much more, but really, hit the play button below.