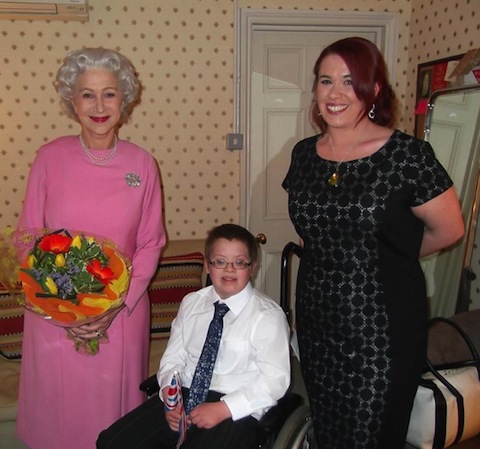 Oliver Burton is a 10 year old boy who is dying of cancer.

His greatest wish was to visit Buckingham Palace and have afternoon tea with the Queen.  As life would have it, Her Royal Highness was unable to fit the Oliver into her schedule.

But this story has a happy ending because the fab Helen Mirren stepped in and saved the day.

Oliver, who has Down’s syndrome, has been battling various forms of cancer almost his entire life, and was recently diagnosed with terminal spine and bone marrow cancer.

But last week, for a brief afternoon, his troubles took a backseat to a meeting with the “Queen.”

Helen Mirren, currently starring in the West End in Peter Morgan’s play The Audience, invited Oliver and his family to see her performance.  (I saw the play last month and Mirren is fantastic, earning all of her rave reviews).

Still dressed as the Queen, she then invited Oliver backstage to have tea and cakes.

Mirren even took the time to knight Oliver, giving him the official title of Sir.

“She stayed in character for the whole thing. Oliver thought she was the real Queen, and well, that’s good enough for us,” Oliver’s father James Browne is quoted as saying.

“It was a pleasure and a privilege to meet such a brave young man,” Mirren later told The Sun.