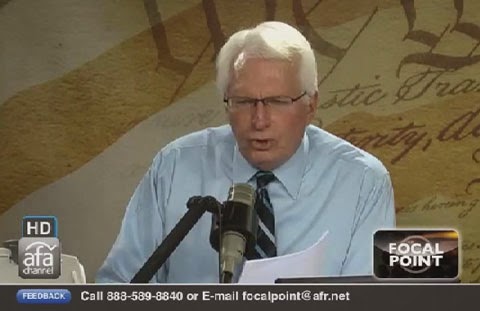 For years, readers have seen me posted about the outrageous and hateful things that have spewed forth from Bryan Fischer – now formerly of the hate group, the American Family Association.

It seems all things must come to an end something, as the AFA announced tonight that Bryan Fischer is no longer the spokesman for the organization; the position he has held for years.

Rachel Maddow tonight broke news that the American Family Association has officially fired notorious evangelist Bryan Fischer after a controversy involving the RNC and Israel. Fischer is notorious for having some––well, let’s not sugarcoat it––crazy views on gays, “homofascists,” more crazy views on gays, and… yeah, basically a lot of gay stuff.

Fischer is so out there, he concocted some insane conspiracy theory last year that the only reason Shepard Smith wasn’t freaking out about Ebola is because he wants to support President Obama‘s big government gay agenda.

At issue this time is an RNC trip to Israel that was apparently being paid for by the American Family Association, of which Fischer is the director of issues analysis.

Or, rather, he was. Until today.

Maddow quoted AFA President Tim Wildmon as dismissing Fischer as “just a talk show host” who is no longer associated with the AFA. When asked specifically what bothered him about Fischer, he cited “the soundbite quotes, you know, the Hitler and the homosexuality one… we reject that.”

I invite you to watch the video below where Rachel Maddow explains how this impacts the Republican National Committee and Israel.

Ding, dong, the witch is dead, which old witch? The wicked witch…