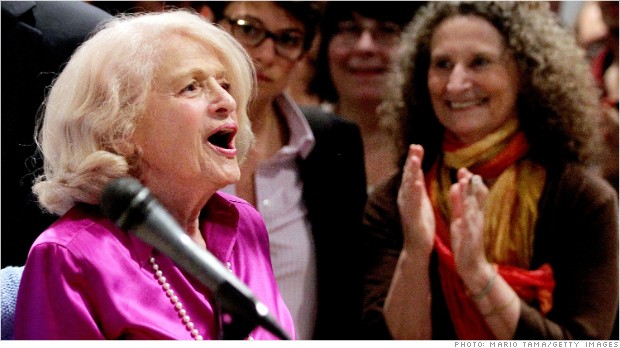 In all of the hoopla over Edie Windsor’s big win at the US Supreme Court, it’s possible we lost focus on why she even started the lawsuit that changed so many of our lives.

Her fight with the IRS.

Normally, surviving spouses are entitled to inherit the estate of their late husband or wife tax free.

But because DOMA only recognized marriage between a man and a woman as legitimate for the purposes of federal law, same-sex spouses have not been entitled to the same privilege.

As a result, Windsor had to pay the federal government roughly $363,000, as well as $275,000 to New York state, where estate tax rules track the federal ones.

That money has been in limbo since Windsor sued to get it back in November 2010. Her case first went before a federal trial court judge in New York, then to the Second Circuit U.S. Court of Appeals, and finally to the U.S. Supreme Court.

Windsor will also be paid interest on her refunds. Paul, Weiss, the law firm that represents her, estimates she will receive about $45,000 in interest on her federal refund and $25,000 on her New York State refund.

The other good news for the 83-year-old Windsor? Her lawyers won’t be getting a cut because Paul, Weiss took the case pro bono.