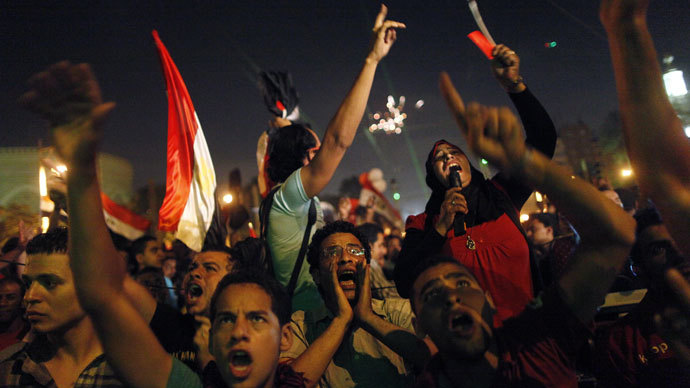 Armored vehicles, tanks and troops deployed throughout the Egyptian capital, including near the presidential palace. The army seized the headquarters of the state television and the state-run newspaper, which reported that Morsi had been told he was no longer president.

The whereabouts of the president himself, an Islamist backed by the Muslim Brotherhood, were unknown.

Karim El-Assiuti told Reuters his colleagues at the Al Jazeera Mubasher Misr channel were arrested while working in the studio. The station was prevented from broadcasting from a pro-Morsi rally and its crew there was also detained, he said.

The State Department, meanwhile, warned U.S. citizens to defer travel to Egypt and told Americans already living in Egypt to depart “because of the continuing political and social unrest.”

President Obama issued a statement that said in part, “The United States is monitoring the very fluid situation in Egypt, and we believe that ultimately the future of Egypt can only be determined by the Egyptian people.” He called on the Egyptian military “to move quickly and responsibly to return full authority back to a democratically elected civilian government as soon as possible through an inclusive and transparent process.”