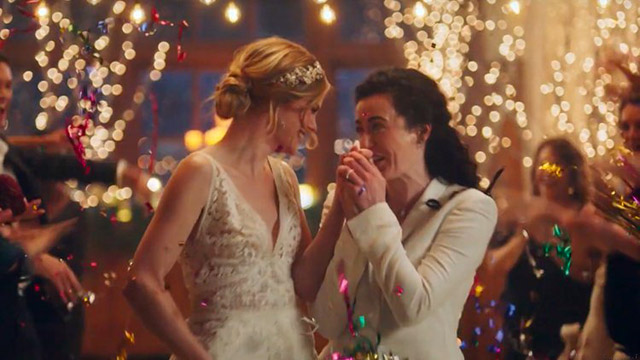 The Hallmark Channel is having a decidedly difficult December.

The cable television channel announced on Thursday it would stop airing four ads from the wedding planning website Zola which included lesbian brides kissing in marriage ceremonies after virulently anti-LGBTQ organization One Million Moms complained about the spots.

At the time, a spokesperson for the company told the New York Times it did not accept ads “that are deemed controversial.”

The spokesman said the women’s public displays of affection “violated the channel’s policies,” but didn’t elaborate as to why a nearly identical ad featuring a bride and groom kissing was not rejected.

Zola then announced it would pull all of its advertising from the channel.

In a statement released on Sunday, president and CEO Mike Perry said the team at Hallmark Channel’s parent company, Crown Media Family Networks, had “been agonizing over this decision as we’ve seen the hurt it has unintentionally caused” and that “they believe this was the wrong decision.”

“Our mission is rooted in helping all people connect, celebrate traditions and be inspired to capture meaningful moments in their lives,” he said. “Anything that detracts from this purpose is not who we are. We are truly sorry for the hurt and disappointment this has caused.”

Perry added his company would work with national LGBTQ media advocacy group GLAAD “to better represent the LGBTQ community across our portfolio of brands,” and that it planned on contacting Zola to “re-establish our partnership and reinstate the commercials.”

Hallmark will be working with GLAAD to better represent the LGBTQ community across our portfolio of brands. The Hallmark Channel will be reaching out to Zola to reestablish our partnership and reinstate the commercials. pic.twitter.com/p17nJpnjEB

“We were deeply troubled when Hallmark rejected our commercials for featuring a lesbian couple celebrating their marriage, and are relieved to see that decision was reversed,” said Mike Chi, the chief marketing officer of Zola. “We are humbled by everyone who showed support not only for Zola, but for all the LGBTQ couples and families who express their love on their wedding day, and every day.”

Sarah Kate Ellis, the president and chief executive of GLAAD, said: “The Hallmark Channel’s decision to correct its mistake sends an important message to LGBTQ people and represents a major loss for fringe organizations, like One Million Moms, whose sole purpose is to hurt families like mine. LGBTQ people are, and will continue to be, a part of advertisements and family programming, and that will never change.”

Amid all the flip-flopping by Hallmark, Freeform, formerly ABC Family which has created LGBTQ-friendly content like The Fosters, The Bold Type, and Good Trouble, tweeted that it would be happy to air Zola’s inclusive ads over the holidays.

“This is what happens when you focus all your energy on exclusion instead of clever plotlines,” tweeted Freeform. “Call us, Zola. We celebrate the holidays with everyone.”

This is what happens when you focus all your energy on exclusion instead of clever plotlines. Call us, @Zola. We celebrate the holidays with everyone. https://t.co/YREKYbhgrv