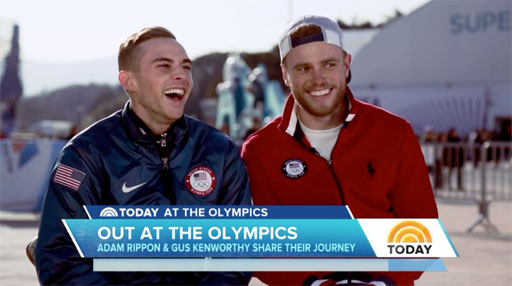 As the 2018 Winter Olympics in PyeongChang are coming to a close, The Today Show sat down with American Olympians Adam Rippon and Gus Kenworthy to reflect on their journey through these Games as the first ever openly gay U.S. Winter Olympians.

Freestyle skier Gus Kenworthy, who came out in 2015 after he won a silver medal in Sochi, admitted that he didn’t know if the support he’d enjoyed would continue as an out athlete.

“I was very much in the closet and very much ashamed of who I was, and I actually didn’t get to appreciate the medal that I won because of that,” he said. “I didn’t know if the gay skier would be an image anyone wanted to get behind or support.”

In reality, Gus has enjoyed more endorsements than just about any other U.S. Olympian.

Figure skater Adam Rippon, who earned a bronze medal at these Games, said it was important to him to show up and be exactly who he is.

“I came here being authentically myself and sharing my story, and being gay is part of that,” Rippon told NBC’s Craig Melvin. “But I came here as an American athlete and I came here to help my team get a medal in that team event, and that was what I focused on.”

Adam found himself at the center of a political firestorm before the Games began with a comment about Vice President Mike Pence’s history of anti-LGBT policies. He also turned down an opportunity to speak with the Vice President.

But Adam handled the issue with aplomb: “I didn’t take the phone call [with Pence] because I needed to focus on the competition.”

Rippon says he would “totally” be open to chatting with the veep after the closing ceremonies in PyeongChang.

If that video disappears, watch the full interview here.

“You’re the first openly gay American athlete to win a medal at the Olympic games. How does that make you feel?” –@craigmelvin

“Great. I came here being authentically myself and sharing my story.” –@Adaripp pic.twitter.com/FMLE1B1bWM

“Mike Pence doesn’t stand for anything that I was taught when I grew up, and I think that it’s important if you’re given the platform to speak up for those who don’t have a voice.” @Adaripp tells @craigmelvin pic.twitter.com/w3No1ksMq4

“My entire life in movies and commercials in public… you see straight, heterosexual love, and that’s completely fine because it’s normal but us also showing the same type of affection isn’t shoving it in your face. It’s just us existing.” –@guskenworthy pic.twitter.com/JBCfylt7rn

“He was mostly jealous.” @guskenworthy says of @Adaripp seeing kiss between Kentworthy and boyfriend at end of his contest 😂 pic.twitter.com/SnNNLEUCqa