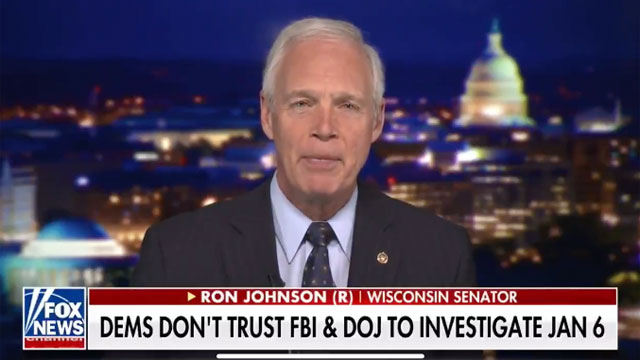 During an appearance on Fox News’s Ingraham Angle, Sen. Ron Johnson (R-WI) continued to rewrite history regarding the invasion of the U.S. Capitol building on January 6.

“By and large, it was a peaceful protest except for there were a number of people, basically agitators that whipped the crowd and breached the Capitol, and that’s really the truth of what’s happening here,” said Johnson.

“But they like to paint that narrative so they can paint a broad brush and basically impugn 75 million Americans, call them potentially domestic terrorists and potential armed insurrectionists as well,” he added.

Last week, Rep. Andrew Clyde (R-GA) claimed “if you didn’t know the TV footage was a video from January the 6th, you would actually think it was a normal tourist visit.”

Ron Johnson claims it wasn’t an insurrection and goes on to say by and large it was a peaceful protest pic.twitter.com/E9TVzhNPTS

Hey @SenRonJohnson, you want to say that to the police officer who nearly had his eye gouged out? Or the other 139 officers injured by Trump’s violent mob? How dare you.

The Capitol was desecrated. They spread excrement on walls, pissed on desks and carpets, stole government property, smashed windows, beat and killed cops and went there with the intention of hanging mike Pence and shooting Nancy Pelosi. They were armed and dangerous #Insurrection