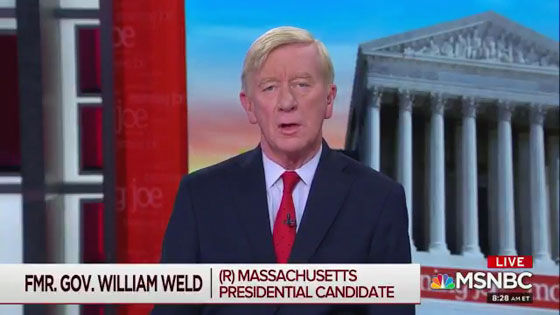 Former Massachusetts governor Bill Weld, one of the few Republicans who have announced they will try and challenge Donald Trump in a GOP primary, told MSNBC’s Morning Joe that Trump’s efforts to press the Ukrainian government into investigating former Vice President Joe Biden and his son amounts to “treason pure and simple.”

“Talk about pressuring a foreign country to interfere and control a U.S. election,” said Weld. “It couldn’t be clearer. That’s not just undermining Democratic institutions. That is treason. It’s treason pure and simple.”

Noting that the penalty for treason in the U.S. is death, Weld said being removed from office would be “a pretty good alternative” for the Donald.

"That's not just undermining Democratic institutions, that is treason. It's treason, pure and simple." pic.twitter.com/k7fWoYUtPk