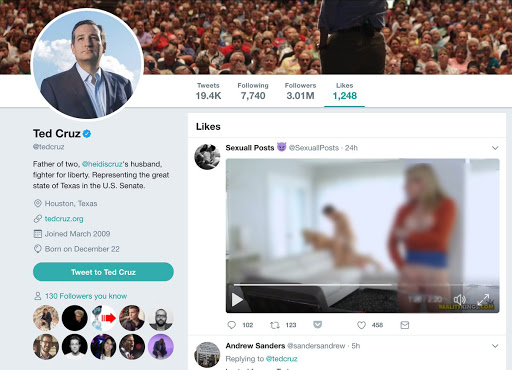 The Twitterverse is all “atwitter” about Republican Sen. Ted Cruz this morning as several intrepid readers noticed that the junior senator from Texas “Liked” a pornographic tweet.

While Cruz’s communications director issued a statement saying the “Like” had been deleted, there was no explanation as to why it appeared in the first place.

Let’s face it – the simple reason would be that Cruz saw the tweet and actually did like it.

It’s all quite funny especially in light of Cruz’s holier than thou religious statements in the past, as well as his involvement in a 2007 court case in Texas about banning the use of sex toys.

Acting as solicitor general for the state of Texas, he defended the state ban on so-called “marital aids” writing, “There is no substantive due process right to stimulate one’s genitals for non-medical purposes unrelated to procreation or outside of an interpersonal relationship.”

That statement struck a lot of folks’ funny bones, particularly his former college roommate who apparently remembers Cruz enjoying some personal “stimulation” back in the day.

Now imagine Ted Cruz is doing this four feet below you in the bottom bunk bed.

Yes, my misery very much appreciates your company.

In the meantime, the Twitterverse had fun:

Steve Bannon- OMG! Ted Cruz just liked one of my videos on Twitter.

Me waiting for Ted Cruz’s inevitable statement that his Twitter was hacked pic.twitter.com/QVkpizbS47

The Ted Cruz the media doesn’t want you to see on 9/11 pic.twitter.com/x4cLYjdsvW

Who knew that the sequel to Covfefe would star Ted Cruz?!

Ted Cruz is such a jerk-off.

“This is not how I envisioned waking up this morning. There are a number of people on the team that have access to the account and it appears that someone inadvertently hit the like button. And when we discovered the post, which I was I guess an hour or two later, we pulled it down. We’re dealing with it internally, but it was a mistake, it was not malicious conduct.”