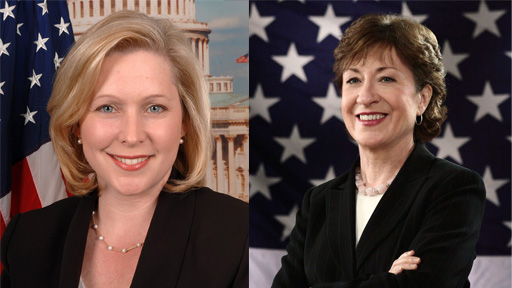 A bipartisan amendment from Senators Susan Collins (R-ME) and Kirsten Gillibrand (D-NY) has been introduced that would effectively stop President Donald Trump from implementing his proposed ban on transgender military service members.

The senators have attached the amendment to the annual National Defense Authorization Act that funds the military. Even though the NDAA is a “must-pass” bill, there’s no guarantee the amendment will get a vote.

The amendment would ban the military from booting transgender soldiers purely for the reason they are transgender.

Senator Gillibrand, the ranking member on the Senate Armed Services Subcommittee on Personnel, said in a joint statement: “Any individual who wants to join our military and meets the standards should be allowed to serve, period. Gender identity should have nothing to do with it. I am proud to work with Senator Collins to introduce our bipartisan amendment to protect transgender members of our Armed Forces, and I will always fight for our brave transgender troops who put their lives on the line to protect our country.”

Senator Collins added: “Our armed forces should welcome the service of any qualified individual who is willing and capable of serving our country. If individuals are willing to put on the uniform of our country, be deployed in war zones, and risk their lives for our freedoms, then we should be expressing our gratitude to them, not trying to exclude them from military service.”