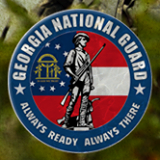 From The Washington Blade reports:

Major Jon Craig, a National Guard Bureau spokesperson, said Georgia had agreed to process applications to grant same-sex spouses military IDs last week in a decision along the lines of Texas and Louisiana.

“With Georgia, what it came down to was the authorization to put some state employees on temporary federal status,” Craig said.

Georgia had been one of two remaining states that had refused to enroll the spouses of gay troops into the benefit system in the aftermath of an edict for Defense Secretary Chuck Hagel saying military spousal benefits should be available to troops in same-sex marriages nationwide. These states had cited state constitutional amendments barring same-sex marriage as the reasons why they couldn’t comply.

Only Mississippi continues to ignore the Defense Department’s order. Talks are ongoing and the state is not commenting.