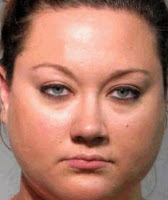 George Zimmerman’s wife was arrested today and charged with perjury for collaborating with her husband to shield the couple’s finances from the court.

According
to an affidavit, Shellie Zimmerman transferred more than $74,000 to her
personal account days before the bond hearing. Taped phone calls
between the couple revealed that they had discussed the money transfers
in code to hide the funds, according to the affidavit. The calls also
showed that George Zimmerman instructed his wife to “pay off all the
bills,” including payments to American Express and Sam’s Club. Nearly
$50,000 was transferred to an account held by Zimmerman’s sister.