One of the biggest questions folks have for serial liar Rep. George Santos (R-NY) has been where did he get $700K to “loan” to his 2022 congressional campaign?

SCOOP: George Santos just told the FEC that hundreds of thousands of dollars in “personal” campaign loans were not, in fact, from his personal funds. Of course, he didn’t say where those funds came from. Me @thedailybeast https://t.co/CCTOgieCbF

Late Tuesday afternoon, Santos’ political operation filed a flurry of amended campaign finance reports, telling the feds, among other things, that a $500,000 loan he gave to his campaign didn’t, in fact, come from his personal funds as he’d previously claimed.

However, while the newly amended filing told us where the funds did not come from, it also raised a new question—where did the money come from?

Another amended filing on Tuesday disclosed that a $125,000 “loan from the candidate” in late October also did not come from his “personal funds,” but like the $500,000 question, did not say where the money came from, when the loan was due, or what entity, if any, backed the money.

Brendan Fischer, of the government watchdog Documented and a campaign finance expert, reviewed the amended filings and wasn’t impressed.

“I don’t know what they think they are doing,” Fischer told The Daily Beast. “Santos’ campaign might have unchecked the ‘personal funds of candidate’ box, but it is still reporting that the $500,000 came from Santos himself. If the ‘loan from candidate’ didn’t actually come from the candidate, then Santos should come clean and disclose where the money really came from.”

He added, “Santos can’t uncheck a box and make his legal problems go away.”

Unlike his lies about business experience, being “Jew-ish,” and his imaginary college volleyball career, willfully filing misleading campaign finance reports can get him jailtime.

More at The Daily Beast.

Here’s the “amended” FEC filing. Note the unchecked box next to “Personal funds of the candidate.” 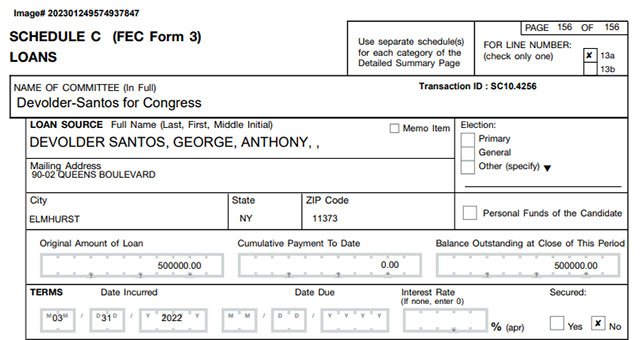 Rep. George Santos has made a significant revision to his 2022 campaign filings by specifying that a $500,000 loan he made to the campaign didn’t come from his personal funds. https://t.co/KpDN32Q5u1

BREAKING: George Santos finally admits the 500K loan to his campaign was NOT a personal loan.

Santos has all but admitted to breaking campaign finance law. RESIGN.