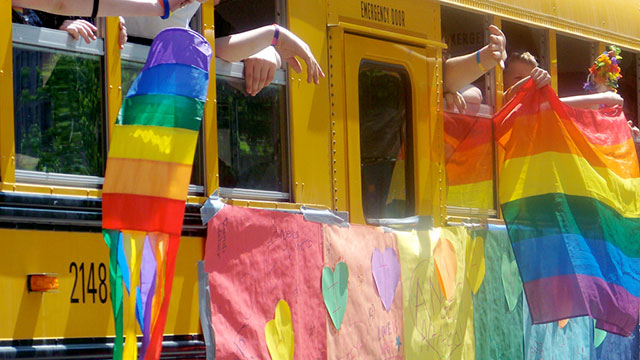 The American Civil Liberties Union of Indiana has filed a lawsuit on behalf of a high school gay-straight alliance after the principal indicated the group cannot publicize its events (or existence) on school bulletin boards or the school radio station as other non-curricular groups are able to do.

The Pendleton Heights Gay-Straight Alliance has not been allowed to publicize its existence on school bulletin boards or on the school’s radio station, while other clubs are able to do so.

That's why we sued. https://t.co/zrVd3JcPcJ

Pendleton Heights Gay-Straight Alliance (PHGSA) is a student-led organization for high school students at Pendleton Heights High School that provides gay, lesbian, bisexual, transgender, non-binary and allied students to meet and provide social, emotional, and educational support to one another.

The American Civil Liberties Union of Indiana today filed a lawsuit on behalf of PHGSA claiming that the school has imposed undue, unequal burdens on the student group.

“This group aims to create an environment that provides support to students, during a time that otherwise might be increasingly difficult for LGBTQ students,” said Kit Malone, advocacy strategist at ACLU of Indiana. “The differential treatment aimed at Pendleton Heights Gay-Straight Alliance by administrators is unwarranted and these students must be treated in the same manner that all other student groups are treated.”

The lawsuit alleges the different treatment of PHGSA violates the First Amendment, the Equal Access Act, and the Equal Protection Clause of the Fourteenth Amendment.

Students are suing an Indiana high school, claiming that the Gay-Straight Alliance is the only club banned from advertising its existence on campus. https://t.co/4KUjzgc8PN