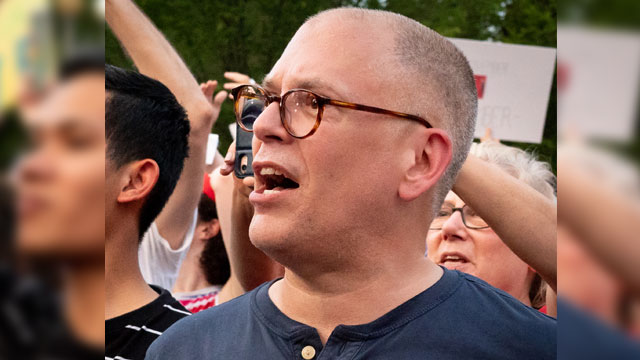 UPDATE: Gay rights icon Jim Obergefell, who became a gay icon as the lead plaintiff in the landmark 2015 Supreme Court case that made marriage equality the law of the land, made it official today. He is definitely running for a seat in the Ohio House.

I’m Jim Obergefell, and you have my promise that I will work hard every day to improve the lives of everyone in Ottawa and Erie counties and all of Ohio. To watch the full video and learn more about my campaign visit my website here: https://t.co/Er6NXVvQE0 pic.twitter.com/b6Jeguz6lg

Obergefell, a Democrat, moved back to his hometown of Sandusky in 2021, putting him in the 89th House District, currently held by Republican D.J. Swearingen.

Given his national profile, Obergefell would be well positioned to gain attention and raise serious money for his campaign.

In July 2013, Obergefell married John Arthur, who was gravely ill. Because Ohio at the time didn’t allow same-sex unions, the couple flew from their home in Cincinnati to Maryland to exchange vows.

Arthur died three months later, and Obergefell sued to be listed on the death certificate as Arthur’s husband. That case was among multiple cases involving dozens of plaintiffs argued together but Obergefell was the lead plaintiff, meaning the case bore his name.

Should he win the seat, Jim Obergefell would be one of a handful of out politicians to serve in Ohio’s General Assembly.

Jim Obergefell, whose name is on the landmark Supreme Court case that granted US same-sex marriage rights, will announce a run for an Ohio House seat.

Obergefell, who was at the center of the 2015 Supreme Court ruling, is running for the Ohio House seat that includes his hometown of Sandusky. https://t.co/vXZBEebiMy