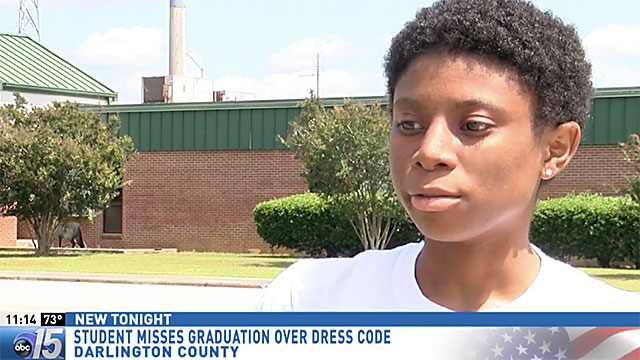 A queer high school senior in South Carolina wasn’t allowed to walk in her own graduation because – wait for it – she wore pants.

While a lot of graduation ceremonies became virtual events due to the ongoing COVID-19 pandemic, Lamar High School in Darlington County managed to hold its 2020 event in the open air on the football field Tuesday afternoon.

But when Dynasia Clark, who’s openly lesbian, arrived at wearing pants – her attire of choice – she was informed she was in violation of the dress code (which requires women to wear a dress during the ceremony) and wouldn’t be allowed to take part.

It’s worth noting that all of those taking part in the ceremony were wearing graduation gowns. So, no one could really see what Clark was wearing underneath.

With just minutes before the ceremony was to begin, Clark walked off the field.

Speaking to the local ABC News affiliate WPDE, Clark said, “I was angry more than anything because we worked hard to even have a graduation, and then I can’t walk because I don’t got on a dress.”

But she didn’t leave the event. Standing outside the venue gates, she waited to hear her name called as the students walked across the stage to accept their diplomas.

However, the school decided to delete her name from the list of graduates’ names read. Clark was, understandably, stunned.

“That was the part that made me more mad than anything because, even if I couldn’t walk, I was there,” explained the teen. “You could have still called my name.”

“It seems crazy to me,” she added. “It seems stupid, like petty, because it was just an outfit to me.”

The Darlington County School District sent this statement to WPDE:

“The Lamar High School dress code for graduation has been in place for more than 20 years. We welcome students or parents who have concerns with any policy or procedure to meet with administration and discuss those concerns. In the past, when a student raised concern with the administration about the dress code prior to graduation day, the issue was addressed.”

Still, Clark’s disappointment was palpable as she told reporter Carlos Flores, “It shouldn’t have stopped me from doing something that I have been waiting on for 12 years. I went to school. Everybody be happy for their graduation day and I couldn’t even experience that.”

You can watch WPDE’s report here.