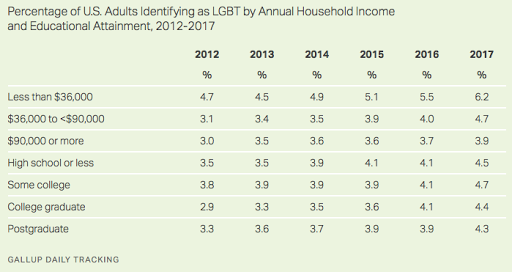 The two biggest stats to note are: more people are identifying as LGBT than ever before, and the biggest surge in those who see themselves as LGBT are in the younger age demographics.

There was no change for Baby Boomers (born between 1946-1964) who maintained a steady 1.4% identifying as LGBT.

Since Gallup began tracking the issue in 2012, LGBT identification has been and is more common among those with lower incomes. The income gap was even larger in 2017 than it has been in previous years, with 6.2% of those making less than $36,000 a year in household income identifying as LGBT, compared with 3.9% of those making $90,000 or more.

LGBT demographic experts say younger people who are LGBT are feeling more and more comfortable over time with their sexual orientation, and thus are more likely to identify as such.