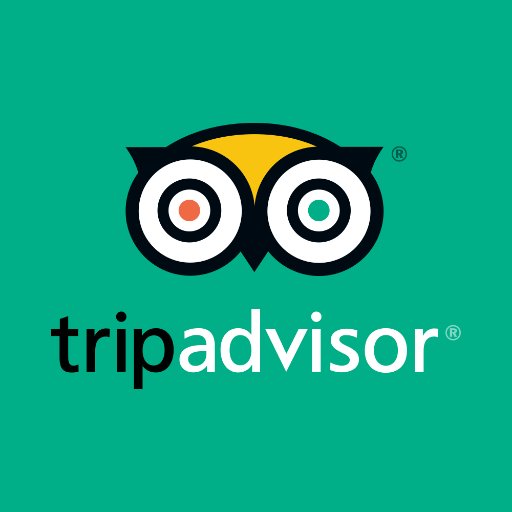 Earlier this week, I reported on streaming giant Netflix sending a cease-and-desist letter to the organizer’s of the upcoming ‘Straight Pride Parade’ scheduled in Boston next month.

The homophobic organizer’s used several corporations logos without permission in an effort to appear that they were “in negotiations” with the companies for sponsorship.

Netflix got sassy with a sentence in the letter reading, “You should know that we’re unafraid of bullies. Our legal department is here, it’s queer, and it’s telling you to steer clear.”

Well, now TripAdvisor got wind of the homophobes using their logo, and they ain’t having it either.

I am writing on behalf of TripAdvisor LLC concerning Super Fun Happy America’s unauthorized use of TripAdvisor’s logo, as displayed on your website [snip]. I’m Coming Out and saying this clearly: you are infringing upon TripAdvisor’s intellectual property rights. Further, your statement that you are “in negotiations” with TripAdvisor as a “potential sponsor” is completely false.

To be precise, your use of the TripAdvisor trademark and our Beautiful logo infringes TripAdvisor’s trademark and trade name rights. TripAdvisor’s trademarks are protected in many countries around the world and Over The Rainbow, including in the United States under Registration Nos. 2727627, 3171193, 4612678, and 445774. We have become a well-known brand for our reviews of hotels, restaurants, experiences and even the occasional YMCA, but we weren’t Born This Way – we obtained that recognition through significant advertising and promotion since as early as 2000. As a result of the breadth of the services it provides and its widespread renown, TripAdvisor enjoys substantial rights in its mark and name.

Contrary to your claims, TripAdvisor is not “in negotiations” with your organization for sponsorship of its “Straight Pride Parade.” Similarly, we have not authorized you to use our name or logo in any way. You Need To Calm Down – you are not sponsored by, associated or affiliated with TripAdvisor in any way, and thus, your use of our marks could confuse the public as to an affiliation with TripAdvisor. These inaccurate statements, which I trust do not show your True Colors, infringe on TripAdvisor’s rights under the Lanham Act, and impinge upon our Freedom! to decide with what organizations we want to associate our brand. Have A Little Respect and remove those statements. TripAdvisor and I Will Survive without being associated with your event.

There is nothing Vogue or acceptable about making false claims about others merely to support your own cause. If I Could Turn Back Time, I would tell you not to use our name in the first place. But now that you have, TripAdvisor demands that you remove all uses of our name, mark and logo from your website (and anywhere else you might use it) within 24 hour and not use them again. In other words, Black Me Out with an “X” on the above webpage. You Make Me Feel (Mighty Real) disappointment that you thought this might be an acceptable way to do business. 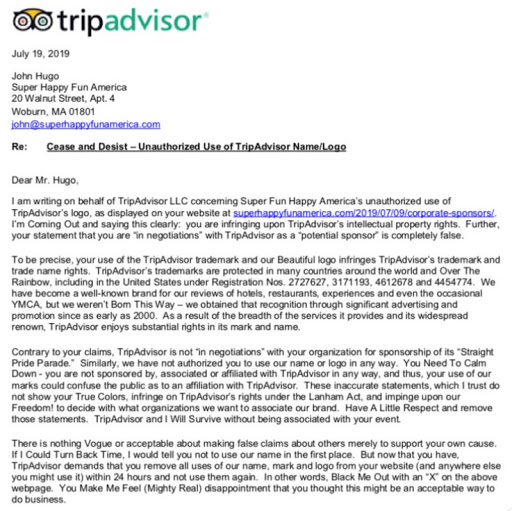