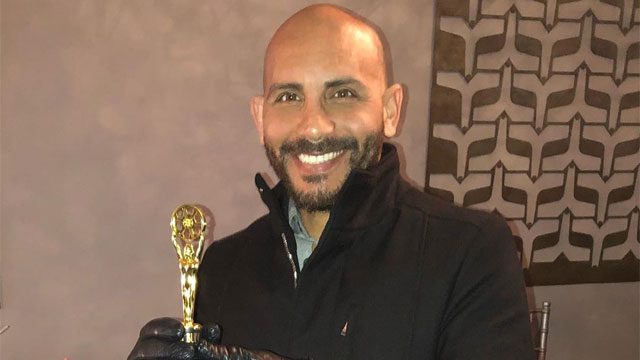 Pop culture fashionistas are spending their Monday recapping the style show that was the Oscars’ red carpet.

Most of the ‘experts’ try to be upbeat but often deliver a few zingers about this dress or that suit, which, let’s face it, can be funny.

In a video posted to Instagram and Twitter, Biaggi goes on an f-bomb filled rant about the fashion parade and he definitely doesn’t hold back.

“Ok, I haven’t seen the Oscars in years, like ten years, almost since Joan Rivers – I miss Joan Rivers,” begins Biaggi before adding, “What the f*ck happened to Joan Rivers?”

Folks were all over the spectrum regarding the Joan Rivers comment with some posting their astonishment (“I have second-hand embarrassment watching this”) to agreeing with Biaggi (“That was everything, thank you”).

When a follower pointed out Rivers passed away, he shifted a bit saying, “We need to get her back from hell.”

Continuing with the rant, he calls out E! Entertainment by name, incredulous that “they think that all the dresses are beautiful! They’re not beautiful – they’re ugly as f*ck!”

Biaggi then goes after two attendees in particular.

“I understand the whole ‘gender-fluidity’ but come on, give me a break,” he adds.

“And then some b*tch called ‘Billie Eilish?’ Who the f*ck is she?”

But – to his credit – with his rant comes a rave.

“You have to dress like Regina King – that’s a beautiful, elegant woman,” announces the 41-year-old. “When you go to a red carpet, dress up nicely, mother-f*ck*rs!”

I have to admit I do agree with some of what Biaggi has to say here because King did serve up supreme deliciousness in an asymmetrical, beaded Versace gown.

And I do scratch my head a bit at some of what I see on the red carpet, but I’m clearly no fashionista on the level of Biaggi.

In subsequent posts, he called out Sandra Oh for looking like a feather duster; Timothée Chalamet was deemed a ‘serial killer;’  and Blacc Chyna scored ‘piñata’ status.

But Charlize Theron and Zazie Beetz got deservedly high marks from the adult performer.

He eventually posted his Best and Worst Dressed choices in subsequent tweets.

Everyone gets to have their opinion, folks, and we celebrate that.