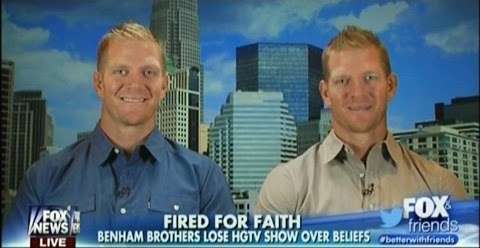 A Fox News host erroneously pointed to the First Amendment in reference to anti-gay brothers Jason and David Benham who found their upcoming HGTV show cancelled when news of their extreme anti-gay and Islamophobic activism came to light.

As posted on The Randy Report earlier, HGTV cancelled its upcoming TV show Flip It Forward following the news that the hosts, Jason and David Benham, had long histories of anti-gay, anti-choice, and anti-Muslim activism.

Initially, Fox News stated that the brothers were punished for their Christian views, but is now suggesting HGTV’s decision to cancel the show actually violated the Benhams’ First Amendment right to free speech.

On July 10, Fox News host Steve Doocy interviewed Jason and David Benham while an on-screen graphic declared they had been “fired for faith.” Doocy argued, “You were fired for having an opinion. I mean, there’s this thing called the First Amendment where people are entitled to their opinion and their Christian beliefs as well.”

HGTV did not violate the First Amendment rights of the Benhams by dropping their show. As Columbia Law’s Suzanne Goldberg pointed out in an interview with CNN, it was most likely a decision to protect the business’ brand following widespread outcry against the Benhams’ comments.

Even David Benham told CNN that he does not hold a grudge against the network, telling Erin Burnett, “It was too much for them to bear and they had to make a business decision.”