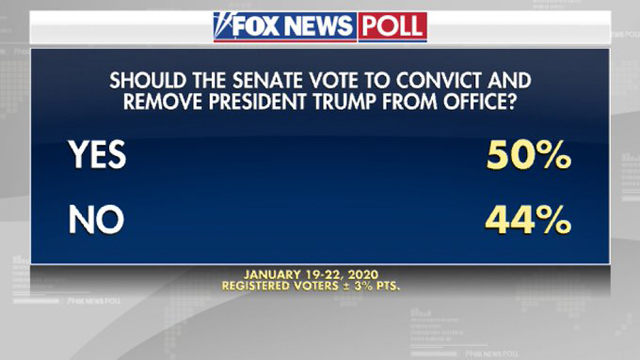 A new poll by Fox News shows 55% of those polled approve of the current economy (44% say it’s only ‘fair’), but 50% say the Senate should vote to remove Donald Trump from the Oval Office.

Even with the strong economy, the new survey says 56% are not satisfied with the direction of the country versus 43% who approve.

And by a 50-44 percent margin, respondents say the Senate should vote to convict Trump and remove him from office. Remember, this a Fox News poll, folks.

While the majority of responses fall on partisan lines – 81% of Democrats say remove and 84% of Republicans disagree – among independents, the results are starker as 53% of those say Trump should be removed versus 34% who disagree.

This is now the third major national poll released this week to show support for removing Trump from office at 50% or higher – 51% in CNN’s poll and Pew’s polling, 50% in the Fox poll.