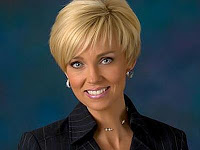 An anchor for a Fox affiliate in Cincinnati, Ohio called lesbian MSNBC anchor Rachel Maddow “such an angry young man” on her Facebook page last month.

Tricia Macke was taken to task by followers and asked to apologize. “You are right,” she wrote. “I am sorry. I should have said ‘antagonistic.'”  This was followed by “I knew what I was saying.”

GLAAD President Herndon Graddick said that Macke owes an apology to Fox 19 viewers, as well as “young people in Ohio who are subjected to unfair bullying and harassment like this on a daily basis.”

The exchange has been removed from her Facebook page, but a follower took a screenshot of the post, which was obtained by Equality Ohio and GLAAD.

A few hours after GLAAD, Equality Ohio and many in the LGBT community called for Macke to apologize, the station issued an apology on their Facebook page as reported by Gay South Florida’s Steve Rothaus:

I recently posted comments on my personal Facebook page regarding cable news anchor Rachel Maddow which were insensitive and inappropriate. I apologize to Ms. Maddow and any others who may have been offended by my comments, as they do not reflect my firm beliefs in individual and equal rights, and they certainly do not represent the opinions or position of my employer WXIX-TV.