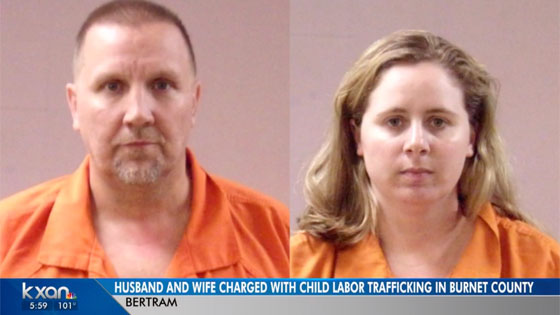 The ringleaders of a former ‘conversion therapy camp’ have been arrested in Texas on child trafficking charges.

More than a year after boys were removed from a nonprofit in Burnet County, the couple who ran it are facing trafficking charges. A grand jury indicted Gary Wiggins, 49, and his wife Meghann Wiggins, 34, on Trafficking of Persons charges.

They are both accused of “knowingly” trafficking four underage boys and “through force, fraud or coercion” making them “engage in forced labor or services.” The two ran Joshua Home, which officials described as a place that “purports to be a residential home for troubled boys.”

According to the indictment, the trafficking allegedly occurred between May 17, 2018 and July 25, 2018. Eight boys between the ages of 10 and 17 were removed after a multi-agency investigation into allegations of abuse, neglect, labor violations, fraud, licensing violations and human trafficking.

Watch the report from KXAN below:

The Advocate reports the couple has hopped from state to state setting up so-called ‘conversion therapy’ camps where they tried to torture the gay out of young boys.

Before the Wigginses set up the home in Missouri, they ran the Blessed Hope Boys Academy in Robertsdale, Ala., where Wiggins was referred to as Brother Gary. The shuttered school was the subject of a 20/20 investigation in which boys who’d been sent there spoke out against the abuse that included forced exercise, solitary confinement, withholding food, and various conversion therapy tactics.

“He took off his belt and started swinging,” Lucas Greenfield whose mother sent him to Blessed Hope because he is gay, told 20/20 in 2017.

“I’m going to get the demon out of you and make you straight,” Gary Wiggins told the boys he terrorized, Greenfield told police in 2016.