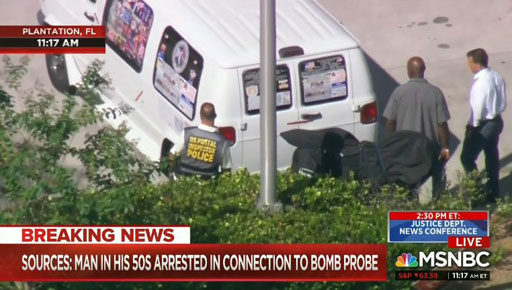 Several news outlets are reporting a man has been arrested in connection with the series of pipe bombs sent to Donald Trump’s political foes.

A man has been arrested in Plantation in connection with the bombs sent to a dozen critics of President Trump, investigators said.

A police source said the federal investigation tracked a suspect to Plantation, near Broward Boulevard and State Road 441. The U.S. Department of Justice said one man was in custody and a press conference will be held at 2:30 p.m. Friday.

FBI agents and other law enforcement officers were examining a white van in a commercial parking lot, covered with pro-Trump stickers. They covered the van with a blue tarp and were preparing to load it on to a truck.

The investigation had shifted to South Florida Thursday and Friday, as the number of bombs reached 12.