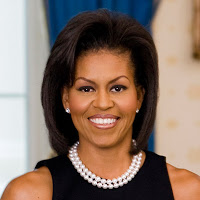 First Lady Michelle Obama was confronted by a protester tonight at a private DNC fundraiser in Washington, D.C.

The First Lady apparently walked over to address Sturtz eye to eye, according to witnesses.
“One of the things that I don’t do well is this,” she said to applause from most of the guests, according to a White House transcript. “Do you understand?”

Sturtz was escorted out of the room. Sturtz said in an interview later she was stunned by Obama’s response.

“She came right down in my face,” Sturtz said. “I was taken aback.”

“I said I want your husband to sign the executive order,” Sturtz said. “Her husband could sign this order tonight and protect 22 percent of the work force in this country.”

I have to say – Sturtz was “taken aback” that the First Lady walked over to her eye to eye? So, Sturtz was hoping to have an anonymous, well-distanced protest?

The proposed executive order that prompted Sturtz’s outburst would prohibit federal contractors from discriminating on the basis of sexual orientation or gender identity. That would be a good thing. The First Lady, however, is not the person to protest.

I believe the President signing an executive order to outlaw LGBT discrimination in the workplace by federal contractors is a good thing. I do. But protesting the First Lady isn’t the place to get the message across.

UPDATE – CNN has video of the heckling and Mrs. Obama’s reaction: