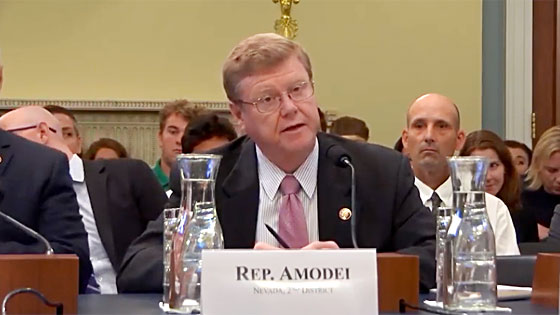 From the Nevada Independent:

“Let’s put it through the process and see what happens,” Amodei, the only Republican in the state’s congressional delegation, said on a call Friday with reporters, adding that he believes Congress is justified to look into the matter.

“I’m a big fan of oversight, so let’s let the committees get to work and see where it goes,” he added.  (An audio recording of the call has been posted below.)

“Using government agencies to, if it’s proven, to put your finger on the scale of an election, I don’t think that’s right,” he continued. “If it turns out that it’s something along those lines, then there’s a problem.”

Amodei issued a statement after the call underscoring his support for the process moving forward and dispelling any impression that he currently backs voting to impeach the president.

“In no way, shape, or form, did I indicate support for impeachment,” Amodei said of the call.

Amodei declined to say whether he believes Trump committed an impeachable offense, though he noted that his comments in the call were regrettable.

“If it was my statement and I had the ability to do it over, I would probably phrase it differently,” he said. “I don’t know that it’s a smoking gun.”