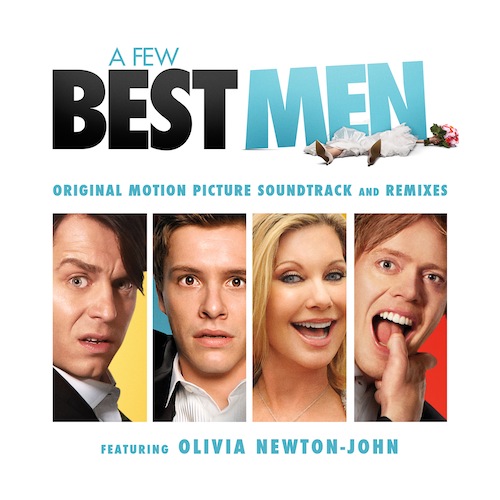 Via Press Release: Universal Music Australia will be releasing “A Few Best Men THE SOUNDTRACK – Music Inspired By The Film” this January 20th 2012 just prior to the film’s opening.

Music featured in the film has been recorded by Olivia Newton-John and remixed by International and local DJs and producers such as Chew FU (official remixes for pop artists including Lady Gaga, Rihanna, Timbaland, Mariah Carey, Roulette (who has support from some of the worlds Djing elite, such as Armand Van Helden & Kissy Sellout) and Archie who has supported Black Eyed Peas, Moby and Tiesto to name a few.

“When Stephan Elliott and Warren Fahey approached me with the idea of re-recording all of the songs featured in the film, I thought it would be fun as I was familiar with the songs from the 70s and 80s. Stephan and I had great fun recording in Los Angeles. Not only is he a great film director but a very talented music producer – full of fun, energy and musical vision. Having never done a dance and club album before, I was excited to hear what the remixers have done with these songs to make them so clever and different from the originals,” said Olivia Newton-John.

‘Mickey’ is the first single off the album and Olivia says: “For ‘Mickey’, my sister Rona and I sang the chorus together and, I never realized how cheeky the words were until I read them! My vocal coach, Steve Real, kept my voice alive that day and also added his beautiful voice to the background vocals. The genius remixers worked magic!”

The soundtrack was devised and produced by music industry veteran, Warren Fahey, and film director, Stephan Elliott. Warren says: “We were lucky to find some extremely eager and talented Australian remixers and also score the extraordinary talents of Chew Fu, probably the hottest remixer on the planet.” The resulting songs are a massive musical leap for Olivia and bring her world famous voice together with sharp edged 21st century music style. It’s a winning mix.

Tracks include classics such as DAYDREAM BELIEVER, AFTERNOON DELIGHT, I THINK I LOVE YOU, LOVE BOAT, LIVE IT UP, SUGAR SUGAR, DEVIL GATE DRIVE, LIVING IN THE 70s, TWO OUT OF THREE AIN’T BAD, GEORGY GIRL, MICKEY all remixed and produced with a fusion of electro house and dance making it a fantastic summer party album, and a brand new album by an iconic International Superstar!

First track ‘Weightless’ returns Olivia to her award-winning partnership with songwriter and producer John Farrar. Together they claim some of the world’s biggest hits including ‘You’re The One I Want’, ‘Physical’ ‘Hopelessly Devoted to You’, ‘Have You Never Been Mellow’, ‘Magic’ and ‘If Not For You’, among others.

Australia’s sweetheart Olivia Newton-John has more than 100 million album sales, her successes include four Grammys, numerous Country Music, American Music and Peoples Choice Awards, Ten #1 hits including “Physical,” which topped the charts for ten consecutive weeks, and over 15 top 10 singles. In 2002, Olivia was inducted into the prestigious Australian Music Hall Of Fame at the 16th Annual ARIA Awards.

Laurence says: “We’re thrilled with the release of this outstanding soundtrack. It takes so many elements from the movie and turns them on their head. Just like her performance on screen, this is Olivia like you’ve never seen or heard her before.”

You can currently pre-order at CDWow.us. Please know the CD is most probably going to be released in the US near the release date of the movie, but for those who can’t wait, try CDWow.us. I know it’s a bit pricey there, but if you don’t want to download on January 20th and you can’t wait for a release date in the US, try that.

More about the film visit the global website for the movie here.