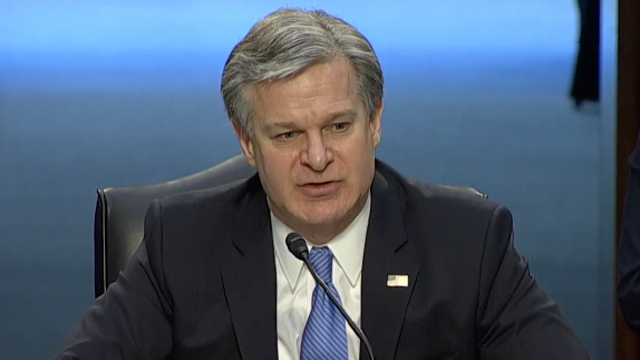 FBI Director Christopher Wray on Tuesday repeatedly shot down claims by Republican allies of former President Donald Trump and others that antifa activists participated in the Jan. 6 assault on the Capitol.

“We have not to date seen any evidence of anarchist violent extremists or people subscribing to antifa in connection with the 6th,” Wray said in testimony to the Senate Judiciary Committee at a hearing to address concerns about the intelligence leading up to the riot and the domestic terrorism threat more broadly. “That doesn’t mean we’re not looking, and we’ll continue to look, but at the moment we have not seen that.”

Wray explained that those who participated in the breach of the Capitol fell into two main groups of violent extremists — those associated with militia groups, such as Oath Keepers, and those who advocate white supremacy.

For weeks, many allies of Donald Trump have tried to deflect blame for the violent invasion of the Capitol building from Trump to  “antifa activists.”

The vast majority of the 300+ participants who have been arrested for taking part in the insurrection have social media accounts chock full of far-right content.

Wray also said today the FBI is not aware of any widespread evidence of voter fraud that would have affected the outcome of the presidential election.

FBI Director Wray: "We have not to date seen any evidence of anarchist violent extremists or people subscribing to Antifa in connection with the 6th." pic.twitter.com/iQbrhvU0Dm