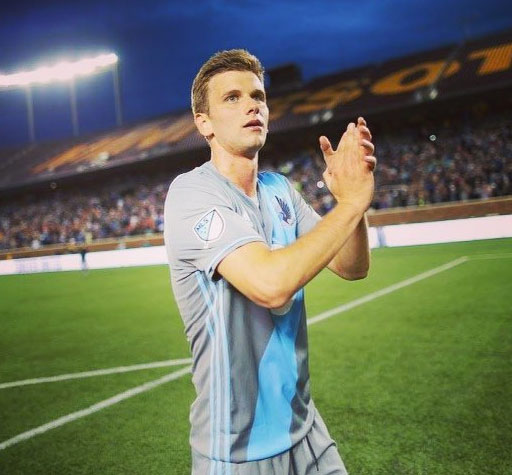 “Tonight my team, @mnufc , is having their Pride night. It’s an important night for me — I’ll be announcing that I am an openly gay player in Major League Soccer. #soccerforall,” wrote Martin just hours before Minnesota United hosts their Pride Night playing FC Dallas.

Tonight my team, @MNUFC , is having their Pride night. It’s an important night for me — I’ll be announcing that I am an openly gay player in Major League Soccer. #soccerforall pic.twitter.com/cOJQXfrBiv

Unfortunately, Martin didn’t get to play that night even though he had been on the field regularly for months.

Martin speculated that manager Adrian Heath might have been concerned Martin’s coming out could have been a distraction for the 23-year-old. “Maybe he thought I had a lot going on today,” he said. “Obviously, I want to play, but most importantly I just wanted us to win.”

But on Wednesday night, July 4, as Martin took to the field as an openly gay man for the very first time, he was greeted with a standing ovation as his name was announced. Fans in the stands were seen waving rainbow colored Minnesota United scarves.

A standing ovation as Collin Martin is announced. Goosebumps. #MINvTOR

It was a good night for Minnesota as Martin’s team triumphed over Toronto with a score of 4-3.

According to reports, after the game the entire Minnesota United crew of players and coaches congratulated Martin with high-fives and hugs.

After the final whistle, every #MNUFC player and coach drifted towards Martin for high-fives and hugs. Great to see the team supporting the midfielder.

Speaking to The Athletic, Martin offered a word of advice to closeted athletes considering coming out.

“Be proud of who you are,” he said. “Just know that after a couple more of us come out, it won’t even be a big deal at all.”

In coming out, Martin became only the second openly gay player in Major League Soccer after Robbie Rogers in 2013.

He is the only openly gay professional athlete currently playing in any of the five major pro sports (football, basketball, baseball, hockey and soccer) in the U.S.