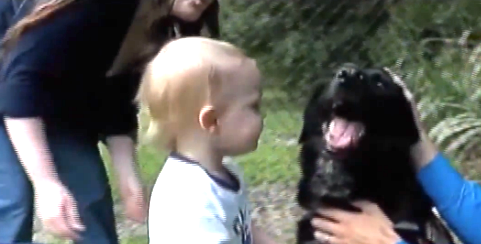 Just one more story that shows how dogs rock as members of our families.

They decided to hire 22-year-old Alexis Khan to babysit Finn when they were busy. She passed a background check with flying colors, and they felt good about their decision.

The Jordans say about five months into Khan’s babysitting, they started noticing their normally friendly dog, Killian, was very protective of Finn and aggressive when Khan came near their son.

So they decided to place an iPhone under the couch and record what happened when Khan was alone with Finn. What they heard included slapping noises and the voice of Khan saying “Shut up, shut the f— up. Shut up.”

After listening to the recording, the outraged parents immediately took their son to the hospital. Fortunately, doctors gave Finn a clean bill of health.

Charleston City Police arrested Khan, and she has since confessed to abusing Finn. As part of her plea, she will be put on a child abuse registry, which will prevent her from working with children again.

And as for Killian, he’s not finished being a hero yet. He’s currently training to be a psychiatric service dog.