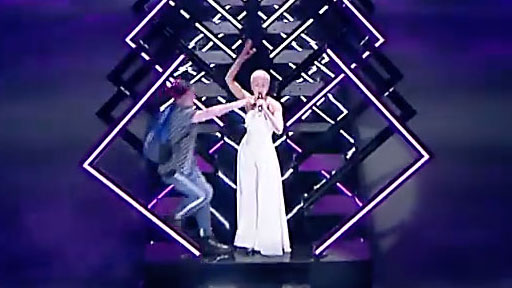 The Grand Finals of the 2018 Eurovision Song Contest were held last night in Lisbon, Portugal, and there were definitely memorable over-the-top moments of different kinds.

The annual music competition is viewed by over 200 million people in the world and often features high-camp concepts.

Winning doesn’t guarantee world fame although there have been a couple of champions who went on to amazing success.

During last night’s performance by the UK’s entry, SuRie singing “Storm,” a man ran onstage, grabbed her microphone and started yelling something along the line of: “Nazis of the UK media, we demand freedom?”

SuRie’s composure was incredible. Her head definitely present, she stepped back allowing security to do it’s job.

Within seconds security had the man in custody and handed the microphone back to SuRie just in time for the lyrics, “Don’t give up!”

Watch the performance, stage invasion (1:40 mark) and amazing recovery below.

SuRie was been given the chance to sing again as the show’s final performance but declined. In a statement, Team SuRie said they were “extremely proud of her performance and have decided that there is absolutely no reason to perform the song again.”

Surprisingly, Team UK placed near the bottom of the results. Which just goes to show – who knows?

I thought she was pretty terrific. 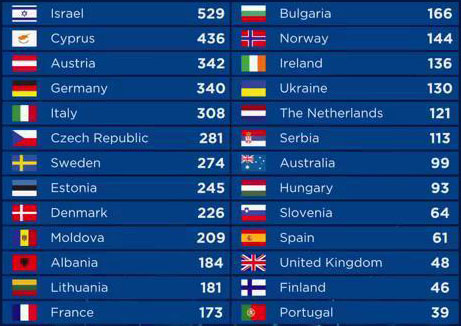 Also part of the drama this year was a Chinese broadcaster censoring the performance by Ireland’s Ryan O’Shaughnessy which featured two men dancing together.

The European Broadcasting Union banned the channel, Mango TV, from broadcasting saying in a statement that the censorship was “not in line” with its “values of universality and inclusivity.”

In the end, the winner of the mega-competition was Netta Barzilai of Israel whose performance of pop anthem “Toy” included beatboxing, chicken noises and arm flaps.

That decision caused it’s own drama as supporters and opponents decried political frictions between Israel and other countries in the Middle East.