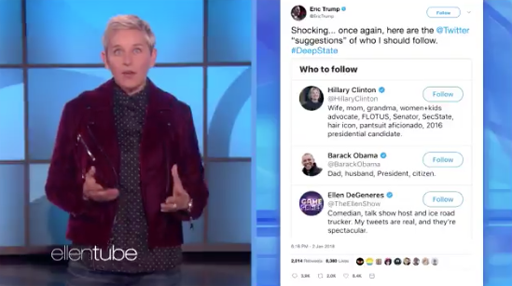 Ellen DeGeneres was recently surprised to see her name was trending on Twitter and, unfortunately, it wasn’t because of her new game show “Ellen’s Game of Games.”

No, it was due to Eric Trump – officially the dumbest Trump – pondering if Ellen was a member of the political conspiracy known as the “Deep State.”

Ellen addressed Eric’s concerns in her monologue today after first trying to figure out who Eric is (“Which one is Eric? Did he kill the elephant or the cheetah?”).

“I just wanna say, Eric, I am honored that you think that I’m powerful enough to be part of a government conspiracy,” said Ellen. “I am sorry to disappoint you, I am not part of the Deep State. Even if somebody wanted me to be involved, I don’t have that kind of time. I’ve got my gay agenda meetings on Mondays. I’ve got on Wednesday Beyoncé and I host an illuminati brunch. And then Portia and I on the weekends are desperately trying to have a baby so I can’t. I don’t have time.”

DeGeneres did, however, point to the most logical cause as to why she would show up in Eric’s Twitter feed:

I woke up to discover I was part of a government conspiracy called #DeepState. Here’s what I have to say about it. pic.twitter.com/YbyrUgxA4T