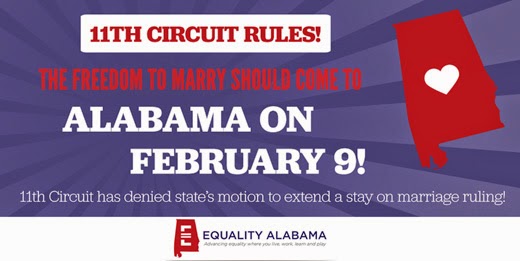 Equality Alabama tweets the news that the 11th Circuit Court of Appeals has DENIED Alabama’s request for an extension of the current stay on the ruling which strikes down a ban on same-sex marriage.

The stay is set to expire on February 9th.

Unless the U. S. Supreme Court steps in with a stay, marriage equality will begin in Alabama upon the stay’s expiration.

It should be noted that when the state of Florida went to SCOTUS with a similar extension, SCOTUS denied that request.

I expect Alabama WILL head to SCOTUS, but the answer from the Supreme’s may tell us much about how the high court is leaning to rule in June on same-sex marriage.

UPDATE: The Plaintiffs in the case have asked U.S. District Judge Granade to remove the stay now, and not wait until February 9th.

From the lawyers for cari Searcy and Kimberly McKeand:

“Plaintiffs respectfully submit that there is no reason for this Court’s stay to remain in place until February 9, 2015, as the Court made clear that this Court’s stay was to allow the Defendants time to seek relief from the Eleventh Circuit on that issue.

“The Defendants have done so, and the Eleventh Circuit has denied their motion.”

As expected, Alabama Attorney General Luther Strange has asked SCOTUS to stay the ruling, saying, “I am disappointed in the 11th U.S. Circuit Court’s decision not to stay the federal district court’s ruling.

“The confusion that has been created by the District Court’s ruling could linger for months until the U.S. Supreme Court resolves this issue once and for all.”