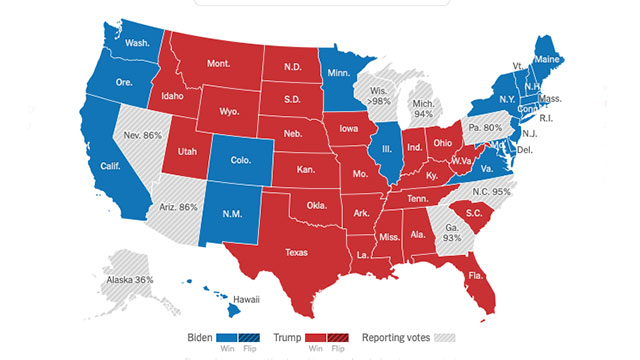 With six states left undecided in the presidential race, most folks are saying they’d rather be in Joe Biden’s shoes than Donald Trump’s at this point.

I’ll be updating this page as states are called.

Update 1: Wisconsin was just called for Biden giving him 237 electoral votes to Trump’s 213.

The Trump campaign is already calling for a recount in Wisconsin but state law says a recount can’t happen until 10 days after an election.

Former Wisconsin Gov. Scott Walker says Biden’s 20,000+ advantage could be tough to overcome in a recount tweeting, “After recount in 2011 race for WI Supreme Court, there was a swing of 300 votes. After recount in 2016 Presidential race in WI, Trump’s numbers went up by 131.”

Here’s an abbreviated version of how things stand according to Nate Cohn at the New York Times:

Nevada: Mr. Biden has a narrow lead (7,600+), with only 86 percent of Democratic stronghold Clark County (Las Vegas) has been counted. The remaining ballots look to be Democratic-leaning late mail and provisional ballots.

Arizona: Biden leads by 3.5 points and there’s more than 10 percent of the vote yet to be counted in Democratic strongholds Maricopa and Pima Counties. There are late mail ballots, received by the state over the last few days and those ballots usually tilt Democratic.

Michigan: Biden leads with over 48,000 and almost 20 percent of heavily Democratic Wayne County (Detroit) remains to be counted. It’s reasonable to assume that much of the outstanding vote is Democratic mail-in ballots.

Pennsylvania: Trump currently leads here by 463,000+ votes – but only 80 percent of the votes have been counted. There are many outstanding votes in Democratic-leaning areas like Philadelphia and the Pittsburgh area. The majority of those are mail-in ballots, which Biden has won those by a margin of 78 percent to 21 percent. There are more than 1.4 million absentee votes left to count, according to the secretary of state, plus more that could arrive over the next few days. If Biden wins those by the same margin he’s been winning them so far it would net him 800,000 votes.

Georgia: Trump leads with 93 percent of the vote in (83,000+ votes). An estimated 200,000 uncounted votes remain in the state, and most come from left-leaning areas of metropolitan Atlanta, which could mean they’re likely to skew Democratic. According to the secretary of state, the winners of most races in the state should be announced by Wednesday afternoon.

North Carolina: Trump leads by 1.4 points (76,000+ votes), so it’s not really that close. But, the state accepts mail ballots received after the election until November 12, and there were around half a million absentee ballots still outstanding heading into Election Day. I personally don’t expect Biden to win here.