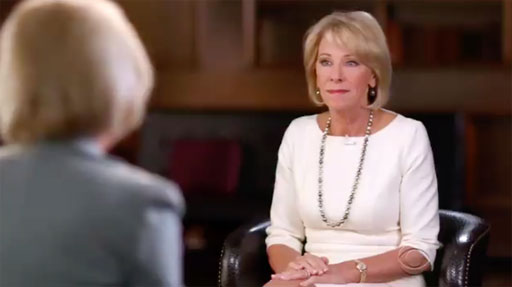 Even on questions about schools in her home state of Michigan, where public schools there have gotten worse, DeVos admitted she hadn’t “intentionally visited schools that are underperforming.”

Stahl’s response? “Maybe you should.”

DeVos became Education Secretary as reward for her family’s huge donations to Republican campaigns and causes. She married an heir to the Amway fortune and has made destroying the public school system the cause of her life.

DeVos says her actions have been to champion “choice” but in truth her goal is for religious schools to take over education in America.

And since the vouchers don’t cover the full cost of private schools, lower income families are left behind with the remains of a decaying public school system.

Put simply, DeVos is a huge threat to public education and the separation of church and state in America.

Like the rest of Donald Trump’s cabinet, DeVos is a champion of deregulation. As Secretary of Education she is tasked with overseeing guidelines that protect the civil rights of students.

But mere days after being confirmed, she rescinded Obama-era guidelines that allowed transgender students to use the bathrooms of their choice. What a surprise.

Here’s a link to the full transcript of last night’s debacle.

MAGA people are rushing to defend Betsy DeVos, who was ambushed by unfair gotcha questions like “Have you ever been in a cafeteria” and “What do you think schools do”

We all expected a controversial blonde woman to embarrass the Trump administration on 60 minutes, we just thought it would be Stormy Daniels not Betsy DeVos.

Betsy DeVos wasn’t asked what is the airspeed velocity of an unladen swallow. She was asked basic questions about education and had trouble answering them.

Betsy DeVos can’t answer questions about improving the educational system because her goal is to raze it to the ground. She’s a saboteur. https://t.co/V9Ebu3xe4M

Lesley Stahl: Perhaps you should visit public schools that have lost funding to charter schools and aren’t doing so well.

DeVos: Perhaps I should.