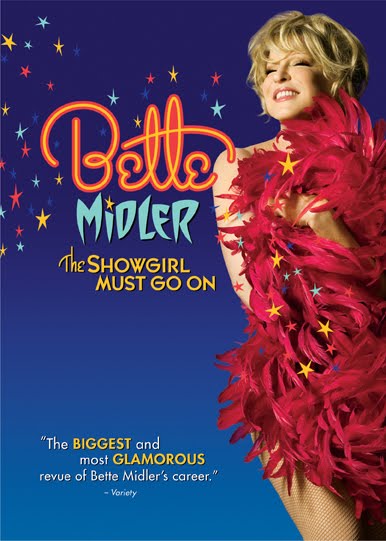 Available today – the great, fabulous and singular Bette Midler. I saw this show twice in Vegas and she wears the mantle of “star” as only she can.

The New York Times exults, “Like all great showgirls, she [Midler] may wear sequins like a second skin, but the woman underneath is all flesh and blood, humor and heart.”

The $10 million extravaganza played over 300 performances in a nearly three-year run at the famed Colosseum at Caesar’s Palace. Taped before thousands in The Colosseum at Caesars Palace in Las Vegas, the 70-minute cavalcade feaures many of Ms. Midler’s colorful and classic stage and screen characters.

Joining her on the gargantuan stage is an energetic corps of talented performers, including the staggering Harlettes, twenty dazzling dancers she calls The Caesar Salad Girls and a 13-piece band. The production was nominated for a 2011 Emmy Award for Outstanding Variety, Music or Comedy Special.

If you love divas – great stars who deliver – stars who are singular in their artistry, you will want this DVD.