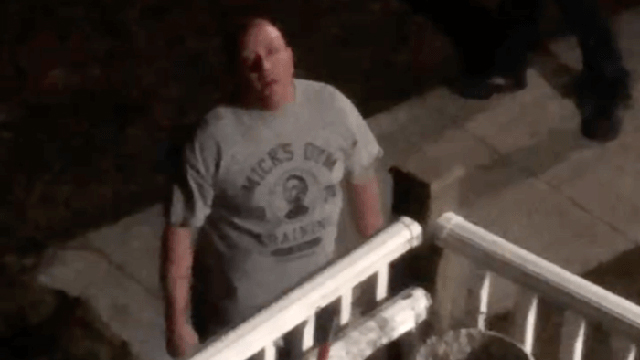 A gay couple living on Staten Island, New York, were terrorized by a drunk homophobe who yelled anti-gay slurs outside their home, kicked their front door, and promised to “get you wherever you go.”

Joe Canale and Raymond Gamarra were home on Saturday, January 23, when they heard loud noises coming from a neighbor’s late night house party.

According to Gay City News, they went to the neighbors to ask to them to keep the noise down, but a man attending the party became enraged.

The next thing the couple knew, a man identified as Clifford Hammel walked over to their front yard and began harassing them.

In the video obtained by Gay City News, Hammel can clearly be heard shouting, “I see you, f*cking fa**ot. You little b*tch. F*ck you. You fucking fa**ot.”

At one point, Hammel qualified his language as he repeated the slurs, yelling, “You f*cking fa**ot — and that’s not a homosexual. I don’t give a f*ck if you suck d*ck.”

Along the way, Hammel reportedly named the gym the couple go to as well as the school where Canale is the principal.

After attempting to kick the couple’s front door in, Hammel added, “Wherever you go, I will get to you.”

The moment when a man harassed a gay couple with anti-LGBTQ slurs, threatened them, and kicked the door of their home in Staten Island. pic.twitter.com/S58jKx0ooX

Canale called the police but were told officers were already on their way to the location as someone attending the party apparently needed medical attention having passed out.The couple say the police officers who arrived, Lieutenant Rosago and Officer Vincent of the NYPD, seemed “dismissive” of their situation after explaining the disturbing visits from Hammel. Canale said the officers were “reluctant” to even view the video footage of the man threatening them

The officers explained they thought Hammel was the man being taken to the hospital, so they “don’t have to worry or be afraid.”

But when Canale followed up with police at the 121st Precinct, it seems the officers had written Hammel’s name down incorrectly. AND, Hammel wasn’t the partygoer transported to the hospital.

Disturbed by the nonchalant handling of the incident, the couple reached out to Staten Island District Attorney Michael McMahon.

In a statement, McMahon said, “Any time a serious allegation is brought to our attention, we work in tandem to thoroughly investigate and bring criminal charges when appropriate under the law.”

He added, “We are committed to securing the right of every person to live their lives free from bias and hate on Staten Island.”

But Gamarra and Canale are unconvinced as to how seriously their concerns were treated.

“Staten Island is not a bastion of tolerance,” Canale told GCN. “There are so many things that are disturbing about this that I don’t even know where to begin.”

“I understand there’s COVID, but justice delayed is justice denied as far as I’m concerned.”