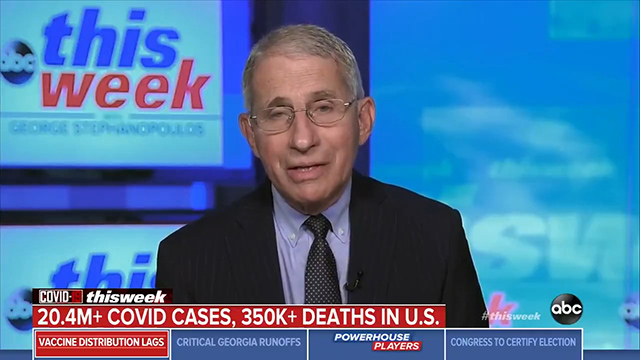 During an appearance on ABC News’s This Week, Dr. Anthony Fauci shared that he did not foresee how the COVID-19 pandemic death toll in the United States would spin out to such high levels.

Fauci pointed to indoor activities and holiday travel for aiding transmission of the virus. He also repeated his call for Americans to take public health precautions seriously if we ever hope to slow the current surge.

“To have 300,000 cases in a given day, and between two and 3,000 deaths a day is just terrible,” the nation’s top infectious disease expert told ABC’s “This Week” Co-anchor Martha Raddatz Sunday. “There’s no running away from the numbers, Martha. It’s something that we absolutely got to grasp and get our arms around and turn that inflection down by very intensive adherence to the public health measures, uniformly, throughout the country, with no exception.”

“The deaths are real deaths,” Fauci, the director of the National Institute of Allergy and Infectious Diseases, said, when asked by Raddatz for his response to the president’s tweet. “All you need to do is go out into the trenches. Go to the hospitals and see what the health care workers are dealing with. They are under very stressful situations in many areas of the country. The hospital beds are stretched, people are running out of beds, running out of trained personnel who are exhausted.”

Just prior to Fauci’s appearance, Donald Trump tweeted (with no evidence) that the numbers from the Centers for Disease Control and Prevention of infected persons and deaths in the country are “exaggerated.” That’s in spite of nearly every state reporting increased coronavirus infections nationwide.

According to Johns Hopkins University COVID tracker, the U.S. this weekend surpassed 20 million reported cases of COVID-19, and the number of deaths has now exceeded 351,000 since the pandemic began 10 months ago.

NEW: Dr. Anthony Fauci responds to Pres. Trump's morning tweet on COVID-19 related deaths: "The deaths are real deaths. All you need to do is go out into the trenches… that's real, that's not fake." https://t.co/kKafPs2tFM pic.twitter.com/84ypgvOcl1

The number of cases and deaths of the China Virus is far exaggerated in the United States because of @CDCgov’s ridiculous method of determination compared to other countries, many of whom report, purposely, very inaccurately and low. “When in doubt, call it Covid.” Fake News!

With no due respect, Donald, because none is due, you're an utter moron.

You said nobody would be talking about COVID after November 4th.

You're just an idiot. This is why the American people have kicked you to the curb like never before in history.

Lardy, there are tapes! pic.twitter.com/NTjgYR4fzs