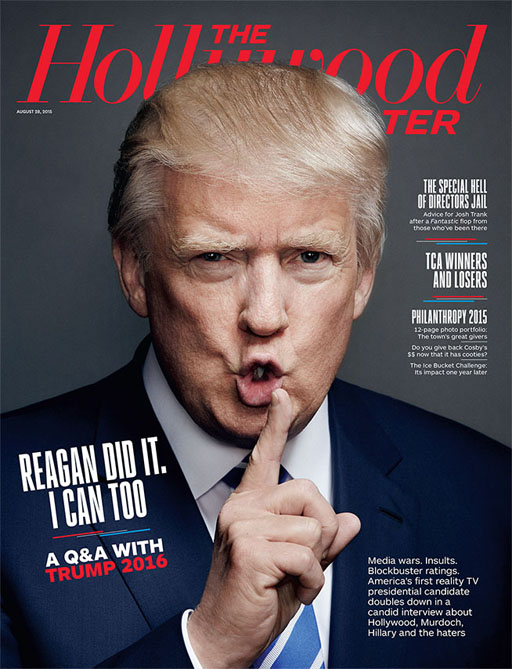 GOP hopeful (and current leader of the pack) Donald Trump has given his first magazine cover story interview. And what magazine does the very politically serious candidate bequeath the honor?

The Hollywood Reporter, of course.

And he’s right on point throughout the interview, with all the “Trumpisms” you could want.

Here’s just a few gems from the interview:

You’re getting a ton of criticism. Does any of it actually ring true?

People say, “He won’t apologize for anything” — well, I was right on illegal immigration. [John] McCain blew it because he’s done a poor job of taking care of the veterans. And then the third element so far, you had Megyn Kelly, and I think you’ve seen what happened with that. I feel quite confident in my position. At the same time, I believe in apologizing. But to apologize for me is very difficult. I definitely would apologize if I were wrong on something.

What was the last thing you apologized for?

It was too many years ago to remember. I have one of the great memories of all time, but it was too long ago.

You say you would have liked the states, rather than the Supreme Court, to decide on gay marriage. Have you been to a gay wedding?

So is this a dead issue for the GOP at this point?

Some people have hopes of passing amendments, but it’s not going to happen. Congress can’t pass simple things, let alone that. So anybody that’s making that an issue is doing it for political reasons. The Supreme Court ruled on it.

If you’re Jeb Bush, how would you compete against Donald Trump?

Jeb is a very nice person, but he is very low energy. And you need a person with great energy, enthusiasm and brainpower to straighten out our country. Our country is a mess in almost every way.

Are you having fun? It seems that way.

Well, it’s more fun when you’re leading the polls. I might not like it as much if I was mired in 10th place. Leading the polls is more fun than if you’re in 12th place [or], like, Lindsey Graham in 17th place with zero percent and he’s a senator. He’s actually got zero. How do you do that?

Eventually, HBO will do a movie about this election. Who should play you?

Somebody really, really handsome. That’s the only thing that matters. I don’t care if he can act well. He’s got to be really, really good-looking. OK?

Read the full interview at The Hollywood Reporter.